Four days in Paris stretched ahead of me in December, with the promise of blue – if somewhat chilly – skies and some serious sightseeing. It had been many years since I’d been in the French capital and I was looking forward to it enormously.

But fate – and a serious dose of the flu – had other ideas. After one glorious day exploring the cobbled streets of Montmarte, watching the artists at work, and the queues of tourists eager to see inside the great basilica of Sacre Coeur, lunching in a packed café and admiring the Eiffel Tower across the city rooftops, I was struck down. The remaining three days of my Paris soujourn were spent in my sick bed, downing antibiotics prescribed by a handsome young doctor.

After seeing so little of Paris, I was happy to do so vicariously when an invitation arrived to preview one of the movies that will screen during the upcoming Alliance Francaise French Film Festival in Brisbane.

I headed out to see See You Up There (Au revoir là-haut), the story of two soldiers who survive the trenches of World War I; one of them a brilliant, but disfigured designer who hides behind fabulously elaborate masks, the other a humble accountant. They embark upon a dangerous, but spectacular scam, selling phony war memorials in 1920s France. I was expecting a ‘caper’ movie, but it’s so much more, full of poignancy, and a film you’ll think about for a long time.

It was just a taste of what the festival offers. For his second year at the helm, artistic director Philippe Platel has for the first time included an LGBT strand in celebration of Australia’s recent, historic ‘Yes’ vote for same-sex marriage.  And one of those movies just happens to be called Four Days in France.

A scene from Four Days in France.

I’m looking forward to opening night too, which features C’est la vie! (Le sens de la fête), a comedy/farce which stars Jean-Pierre Bacri – in a role penned especially for him – as Max, a famed, but cantankerous caterer and event organiser, tasked with creating a fairytale wedding at a sumptuous 17th century château. 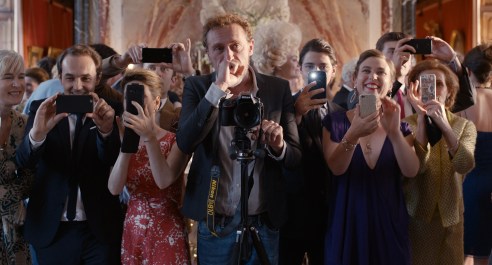 Closing night audiences will be treated to 50 Is the New 30 (Marie-Francine), a rom-com starring Valérie Lemercier as Marie-Francine, a 50 year-old at life’s crossroads. Abandoned by her husband for a younger woman in the same week that she loses her job, she returns to live with her parents, who convince her to open an e-cigarette boutique, where romance beckons in the form of Miguel (Patrick Timsit), a neighbouring chef.

These are just some of the highlights of the festival, staged by the Alliance Française in association with the Embassy of France in Australia, with generous support of sponsor, Renault Australia.

If heading to your choice of the festival’s movies appeals, you’re in luck! I have five double passes to be won by my blog followers – just comment below to let me know why you’d like to attend, and the best five answers will win.

The festival will be held Palace Cinemas in Brisbane from March 8 to April 4 (see website for details of its season in other Australian states). Terms and conditions apply.

5 Responses to “Four Days in France (and other movies)”