Art seems to bloom in the Australian desert. All along the Outback Way, I was thrilled by the opportunities to see artists at work – and to bring some of it home with me.

Before leaving Warakurna, we browsed in the roadhouse gallery and I bought a small dot painting by Eunice Yunurupa Porter. And as luck would have it, while we were there, the curator from Warakura Artists dropped in with three of the artists – including Eunice! I took the opportunity to show her the painting I had bought and ask her to explain some of its meaning to me.

Our next stop was the Giles Weather Station, about 5km from the roadhouse, for the morning weather balloon launch. Giles, operated by the Australian Bureau of Meteorology, is the only staffed weather station within an area of about 2.5 million square kilometres and its location almost slap in the middle of the continent means it plays an important role as a weather and climate observatory for the whole country.  Tourists are welcome to watch the daily release of weather balloons and look through the small museum. I was particularly taken by the artwork on the satellite dish (pictured above). 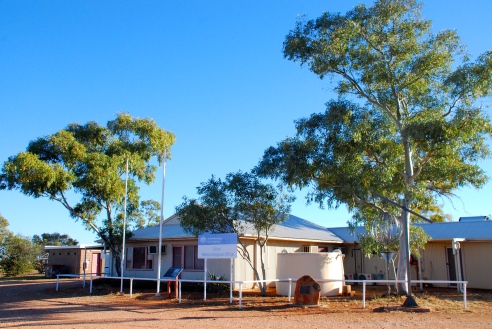 Giles is named after English explorer Ernest Giles, the first European to travel through the area in 1874. Modern-day explorer, surveyor and roadbuilder Len Beadell selected the site for a meteorological station in December 1955. Beadell’s grader, which is estimated to have travelled over 30,000 kilometres (19,000 miles) in the course of making roads in the Outback is on display in a cage. 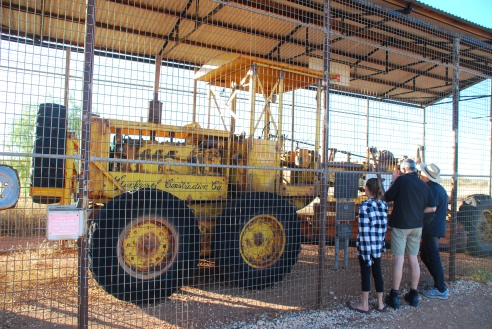 There’s also quite a bit of space junk here, including the remains of the Blue Streak Rocket, launched from Woomera in June 1964 and discovered 50km east of Giles in 1980.

By special invitation, we were also able to detour to visit the community at Warakurna (usually closed to visitors) to see the place where the artists work. About 180 people live at Warakurna. The art centre studio has been operating since and is fully owned and governed by Aboriginal people, to provides services to artists living in and visiting Warakurna and the nearby community of Wanarn.

From the first look at the colourful outside of the studio, it’s obvious this is a special place. Inside, artists of all ages paint and share Tjukurrpa (traditional law and culture) and contemporary stories, keeping their culture alive and strong. Paintings are available for sale through the Warakurna Artists website and all proceeds go directly to the artists and the organisation.

Then it was time to hit the road again, our next stop Warburton, about 230km west, for more art. But what a contrast to Warkurna in size and scale! The Tjulyuru Exhibition Space, home to the Warburton Collection, is a modern spacious building showcasing some of the more than 900 works in the collection, which is the largest collection of indigenous art owned by a community in the world.  Warburton is also known for its glass art, which has been a feature of the work here since 1993.

Our overnight stop was the Warburton Roadhouse, where the accommodation is behind high security fences, but peacocks roam between the simple bungalows.

A Glass Half Full travelled as a guest of the Outback Way Development Board.