ANZAC Day holds a special place in the hearts of Australian and New Zealanders. For many of us, it is a day with personal meaning, as we remember those in our families who have served in wars all over the world through many generations.

Mateship is a strong bond and is recognised as a quality that is inherent in this part of the world. It has been recognised as something that has always helped servicemen “get through” tough times together while serving in battle.  And ANZAC Day – April 25 – is the day we remember the men and women who served – and still do – in the Australia and New Zealand Army Corps. It began as a commemoration for World War I, but now encompasses all wars.

That mateship persists, often not publicly seen, and I discovered an example of it last week when I was visiting Melbourne.

Despite having lived within coo-ee of it for seven years, and walked past its door countless times, I’d never been inside the St Kilda Returned Services League (RSL) Club until last week. When I did, it was quite a revelation. From the outside, the impressive building seems to open up to a bar full of poker machines but step inside and it’s quite another story.

Upstairs in the Members’ Bar, I meet the club manager, Vin Butcher, who fills me in on the history of the place.

When the club was first proposed in 1920, not long after the end of World War I, it was decided that the Memorial Hall which would be built should carry incorporation which gave it the power to secure a source of revenue and that the profits from that revenue would be devoted to “the relief of distressed soldiers and their dependents”.  The clubrooms and the memorial hall would have a guaranteed source of revenue from the day of their completion.

After a competition – limited to architects who were also returned servicemen – the company of Hudson & Wadrop (who also later designed Melbourne’s Shrine of Remembrance) was chosen. Then came the task of raising the almost 39,500 pounds needed to buy the land on Acland Street and build the hall. Most of the money was raised by beach carnivals at Luna Park, special appeals and other entertainment. The St Kilda Council chipped in 3000 pounds.

The four-storey Memorial Hall building opened in 1924.  The hall itself could seat 1000 and take 500 for dancing! It also had space for four shops, and the two top levels had 12 flats to be used for subsidised housing for returned service personnel.  Members still live in those flats (administered by a trust) today.

As one of the ways of raising money, part of the hall was leased as a picture theatre, known locally as The Memorial or “The Memo”. It operated from 1927 until late 1958. Although no longer a cinema, it continued its association with the film industry, being used as a rehearsal space by the Pan Pacific Films company until 1992. This link has also been revived by the recent opening of The Memo Theatre, in the old dance hall space, run by local entrepreneur and arts enthusiast David Carruthers, who owns The Dog’s Bar further up Acland Street.

Carruthers later tells me that he plans the space to be used for a range of arts events – film, fringe, writers’  and comedy festivals among them.

The St Kilda RSL gaming room opened in 1994, and it’s this that most people see.  But upstairs, the Members’ Bar has a much quieter vibe. With a lounge looking out over Acland Street, and past Luna Park to the sea, it’s a hidden space that is also rich in memorabilia. 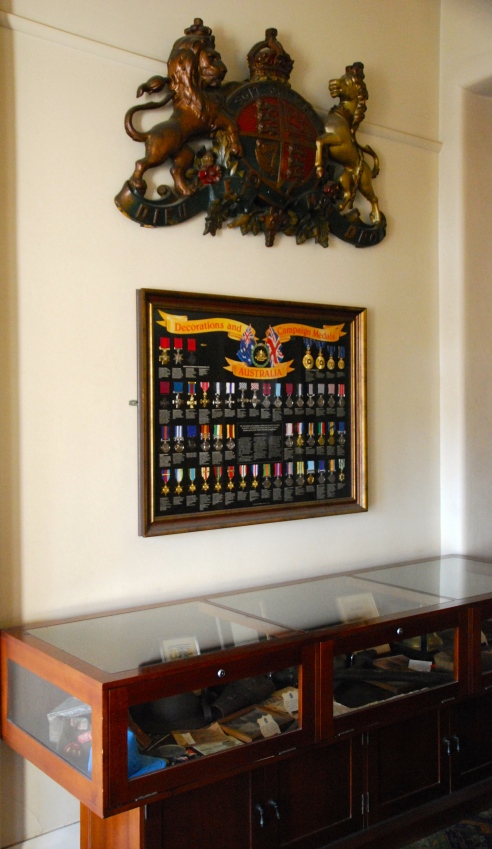 Pride of place goes to Australia’s first Victoria Cross recipient in World War I, Captain Albert Jacka (for whom nearby Jacka Boulevard is named), who was the club’s first president.  Captain Jacka, who later became the mayor of St Kilda, was also awarded of the Military Cross and bar and was a national hero. He served in Gallipoli and France,  but in 1918 he was gassed at Villers-Bretonneux and saw no more action. In 1929, he was elected to the St Kilda Council and a year later became mayor. But in late 1931, he became ill and died suddenly, at the age of 39. Nearly 6000 people filed past his coffin when it lay in state, and the funeral cortege, led by more than 1000 returned soldiers and watched by thousands of onlookers, made its way to St Kilda cemetery where he was buried with full military honours.

These days, live bands play in the upstairs lounge on Friday nights – “mellow sounds in deference to those living upstairs,” says Vin Butcher – and displays of donated military memorabilia line the walls.

Much may have changed in St Kilda, in Acland Street, and in the club over the years. But one thing that has not is the commitment to looking after those who need it. Those 12 one and two-bedroom apartments upstairs are proof of that.

There’ll be no commemorative march in St Kilda this ANZAC Day.  The location is just too close to the Shrine of Remembrance a little further down St Kilda Road.  Instead, the St Kilda diggers usually turn out the weekend before – but this year, they made it even earlier, because of Easter falling just before April 25. So when I walked along Jacka Boulevard in the late afternoon, I was able to pause for a while where wreaths had already been placed at the base of the Victoria Cross Monument in Albert Square. And there, on the base, along with those of three other VC recipients, was the name of Albert Jacka.

4 Responses to “Mateship starts at home”