Dining alone is one of my least favourite things.  And as a travel writer, often travelling alone on assignment, it’s an occupational hazard.  Given the choice, I’d rather order room service than venture solo into a busy restaurant for dinner.

Breakfast, I can do. Lunch, I can do. But I hate having dinner alone in a restaurant. I feel like the loser with no friends, and have had some bad experiences (the table by the toilet or kitchen door, rude staff, being hassled by men-on-the-make).  After too many dinners staring into space, I’ve finally worked out that the best way to avoid curious stares from others is to simply “lose” myself in a book.  Taking notes is another form of defence!

Last week I found myself in the regional Queensland city of Townsville, and was faced with several days of dining alone. Apart from anything else, regional cities aren’t always known for their fabulous dining experiences. And there was nothing in my mind to suggest that Townsville – despite being a city of about 150,000 people – would deliver anything to write home about in the way of cuisine. How wrong I was.

On my first night in town,  I had several recommendations about where to dine.  The Grand Hotel, where I was staying, offered a tempting room service (or charge back) selection from four local restaurants. But I had decided to be brave.  The hotel was just off Townsville’s main restaurant strip, Palmer Street, which is lined with choices.  I walked the length of the street, and back up the other side, before deciding on the place that looked the most inviting and friendly. It had come highly recommended by the hotel staff, and others, so despite the fact I was booked in at Jam Corner for breakfast, I decided to try it for dinner as well.

Rarely do I groan with delight when dining out.  But on this night, I found myself doing just that. I ordered a main course and a side dish…and that was enough for me. Both dishes were among the best I’ve tasted in a long time. The main was a salmon filet, crusted with puffed rice, and served in a shiitake broth, with scallop ceviche, wild mushrooms, pickled ginger, radish, wakame and herbs. The flavours were superb.  I had eaten half of it before I remembered to take a photo! 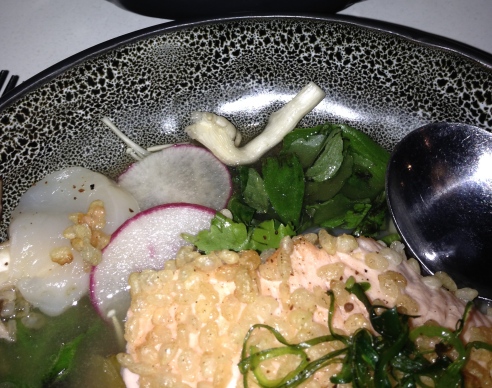 The side dish of green beans, snow peas and Asian mushrooms tossed with miso emulsion and pickled ginger complemented it perfectly.

Jam Corner’s owner/chef Matt Merrin and his kitchen crew deliver “with pride and passion”, with seasonally changing menus. It was this that made me spring out of bed the next morning and practically sprint across the street from the hotel to find out what breakfast would offer.  I was tempted by an eggs-and-avocado dish, but finally decided on something different: an Asian chicken omelette with snow peas, bean shoots, fried shallots and chilli jam. It was perfect, with flavours that perked up my palate and set me up for the day. 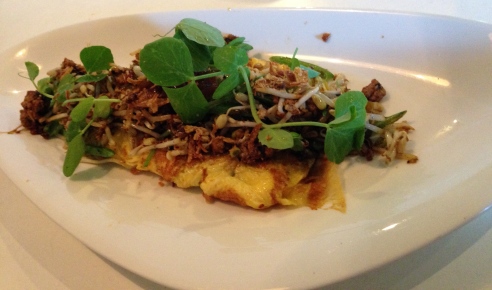 By the time my lunch date met me at Longboard Bar & Grill, on the headland at the end of The Strand, I still wasn’t very hungry. So while my companion went for a plate of four small flour tortillas filled with grilled mackerel, red cabbage, Pico de Gallo and chilli lime coriander dressing, I ordered a salad.

But a salad so substantial that I couldn’t even finish it: slices of smoked Atlantic salmon, with house-cured beetroot, a rocket, apple and fennel salad, with dill and lemon yoghurt dressing. Just delicious, and wonderfully colourful.

After a big afternoon of visiting Townsville’s many attractions, it was time for dinner. This time I was headed – once again just across Palmer Street from my hotel – to a Townsville institution. The multi-award winning Michel’s has been around for many years and owner chefs Jason Makara and Craig Smith offer a contemporary Australian and French influenced menu. I started with an entree of seared scallops with cauliflower puree and a red wine reduction, topped with carrot chips. Yum.

For the main course, I tossed up between a classic French bouillabaisse (seafood stew) or the twice-cooked lamb rump with rosemary pearl barley, roasted vegetables, fried haloumi and mint lane. I went for the lamb…but in the end decided I might have been wrong. It was very good, but perhaps a bit too heavy for my liking .

The next morning found me back at Jam Corner for breakfast. I’d done the length of the street again, but couldn’t go past it. I decided to try what the waitress had told me was the most popular breakfast dish on the menu, the avocado on wholegrain sourdough with whipped marinated Danish feta and poached eggs.

It’s not always like this…and as I prepared to head out of town, I was already revising the way I think about regional restaurants.  Inspiring, delicious food, using fresh seasonal and local produce. Townsville, you’ve got it right! And in both restaurants where I dined with only my novel for company, the service was warm, friendly, and impeccable.

19 Responses to “Tastes of Townsville”