It will be remembered as the summer Australia burned.  The year that – for many Australians – Christmas was cancelled.

As I write this, bushfires have been burning out of control across this vast continent for months. Where there are no fires, cities are choked with acrid smoke. Hundreds of homes have been razed and families are facing a Christmas with nothing but the clothes they were wearing, and perhaps – just perhaps – what personal treasures they could fit in their car. Wildlife are fleeing in the face of the fires, if they can.

Catastrophic. That’s the word being used to describe the fires that are burning across Australia. In the past week, families in parts of New South Wales were told “it’s too late to leave” as raging fires tore towards their properties and were advised to seek shelter in “solid structures” wherever they could. Can you imagine how terrifying that would be?  From the safety of my city home, I can’t.

The city of Brisbane, where I live, is miles from the nearest fires but like most of Australia’s eastern seaboard, is often choked with smoke this summer.

Australians are used to bushfires; it’s an accepted part of the hot summers that come every December to February in the southern hemisphere and people who live in bush areas or surrounded by vegetation are schooled to take precautions each year to minimise the risk. There have been terrible, tragic bushfires in other years, with many lives lost, and some phrases that describe them have become accepted terms that are immediately understood: “Ash Wednesday” (1983) and “Black Saturday” (2009).

But this fire season is different. Fires started burning in September and firefighters – most of them volunteers – have battled to contain or control them. We are told there is no end in sight. That the fires could burn for months yet.

Those of us safe in the cities watch in horror on television and social media as the events unfold. Distraught homeowners weep at the loss of their lives’ dreams as they pick through smouldering ruins. Kangaroos bound ahead of leaping flames, and koalas with burnt paws, gasping for water, are snatched up when possible, while other wildlife perishes. We listen as scientists explain that climate change and weather cycles are contributing to the dangerous combination of high temperatures, strong winds, and dry conditions.  Some of us can barely remember when it last rained, as struggling farmers will attest.

And we learn things too. For example, if fires are powerful enough they can cause fire-generated thunderstorms, which happen when rising turbulent air draws in cooler air and causes lightning, high winds and sometimes rain. In some cases, new fires are started this way. The rain seldom falls where it is needed.

Temperatures are soaring into the high 40s (Celsius). It’s the hottest summer on record in many places. As we swelter and choke on the smoke-laden air, health issues are exacerbated for those with respiratory problems. In the cities, families are seeking relief in air-conditioned shopping malls and cinemas. Country folk don’t often have that luxury.

Christmas is just days away, but many people in bushfire affected areas will have nothing to celebrate.  Firefighters are physically and emotionally exhausted, even with help from crews who have flown in from New Zealand, Canada and the USA to support them.

This week, two firefighters died in the line of duty. Geoffrey Keaton, 32, and Andrew O’Dwyer, 36, were both fathers of small children, so young that they will never remember a Christmas with their fathers.

Every day, things change.  When I started writing this, more than 100 fires were burning in the state of New South Wales alone. Yesterday, the Southern Highlands village of Balmoral, home to around 400 people, was obliterated. More than three million hectares of this land has burned in New South Wales and Queensland alone.

So how are Australians feeling as the fires continue their destructive and unpredictable paths? Distressed, sad, helpless, certainly. But there is also anger.  Anger at a government that has denied climate science, downgraded policies designed to address climate change, and shown little empathy for those now affected by the continuing bushfire emergency.

This week, that public anger has been fuelled by the revelation that Prime Minister Scott Morrison had gone to Hawaii on holiday with his family. Is that leadership? Not in my eyes, and not in the eyes of many other Australians of all political persuasions. His contention that he did not “hold a hose” or “run a control centre” and that it therefore made no difference where he was is almost unbelievable. Leaders stand for much more than just practical help (witness New Zealand Prime Minister Jacinda Ardern in the aftermath of both the recent White Island volcano eruption and the Christchurch shooting massacre earlier this year).

Of course everyone deserves a holiday, but timing is everything. And when I found out that Mr Morrison’s last family holiday, after his successful election campaign in May, was to Fiji, it made me wonder why he isn’t showing his young daughters more of their own country.

Regional Australia – those areas away from the major cities – are crying out for visitors to help them sustain their local economies during one of the worst droughts in memory. Some towns in Queensland have run out of water, which is being trucked in to fill tanks and dams.

Tourist boards are telling city folk that the best way they can help out is to come and visit, spend some dollars in the local shops and cafes. They are urging travel journalists like me and my colleagues to write about their regions to help boost visitor numbers. Why can’t the Prime Minister and his family take up this suggestion, as many other people are doing?

For most of us, of course, Christmas has not been cancelled. We will go on with our plans, bake our cakes, wrap our gifts, decorate our trees, gather our families and friends around us. We’ll also donate to bushfire appeals, and give pause in our celebrations to think about the plight of those less fortunate, not so far away. Around the country communities will rally to cater to firefighters and displaced families on Christmas Day as they have on every day since Nature began wreaking its fiery havoc.

But some families will be wondering where their next Christmas will be, where they will make their new homes, what their future will bring. Others will be mourning the heart-breaking loss of family and friends. 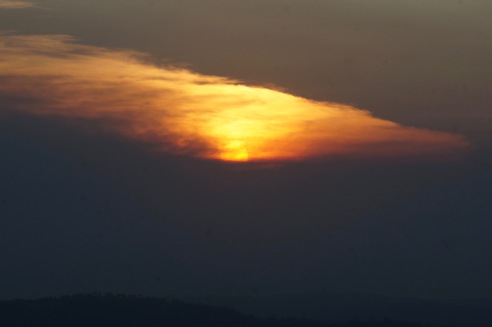 Sunsets this summer have been spectacular. Smoke haze has rendered them other-worldly in their beauty, but that beauty has been tainted by the knowledge of what lies behind them. And when the sun goes down on Christmas Day, when the celebrations are over, spare a thought for the firefighters still out there working their guts out in the heat and the dirt to save someone else’s home.

My Christmas wish is for an end to these fires. For no more loss of life. And for rain.

Wherever you are this Christmas, I wish you a happy and safe festive season.

If you would like to donate to help those affected by the bushfires, here is a list of links from the ABC. https://www.abc.net.au/triplej/programs/hack/bushfire-donations-heres-how-you-can-help/11696418

82 Responses to “The summer Australia burned”