As New Zealand reels from the unpredicted eruption of volcanic Whakaari/White Island, which has killed at least five tourists and injured many more, it’s easy to wonder why anyone would take the risk of walking on an active volcano.

I’ve been to White Island twice during my career as a travel writer, always confident that the appropriate monitoring systems in place would ensure that no harm would come to me or my travel companions as we walked in this incredible place.

Whakaari/White Island is 48km off the coast of New Zealand’s North Island, with tours operating from the Bay of Plenty town of Whakatane. It is New Zealand’s most continuously active volcano, marking the northern end of the Taupo Volcanic Zone.  New Zealand’s volcanic activity has given the country the moniker “The Shaky Isles” for good reason.

About 70 per cent of the island is under the sea, with the floor of the Main Crater less than 30m above sea level and the island’s highest point at 321 metres. The Māori name Whakaari apparently means “to make visible” or “exposed to view”, with the full name Te Puia o Whakaari, meaning “the dramatic volcano”. British explorer Captain James Cook called it White Island as he sailed by in 1769 for the clouds of white steam coming from it.

White Island has been active for at least 150,000 years, and has always been noted for its continual low level activity and small eruptions.  Record-keeping between 1975 and 2001 designated this the most active period in the island’s history for hundreds of years. Major eruptions in the early 1980s destroyed pohutukawa forest and created a large crater lake. Other small eruptions have occurred over the last 10 years but mostly there have been warnings as the island is monitored constantly.

Visitors can also see remnants of the island’s history, including sporadic attempts over the years to mine sulphur, which sadly resulted in a crater collapse in 1914, killing 10 workers. Mining ended in the 1930s and the remains of the buildings, now corroded by the sulphuric gases, have been part of the guided tours.

So why are we drawn to visit such places where danger lurks? Visiting volcanoes, whether it is in New Zealand, Hawaii, Vanuatu, Indonesia or other regions where such tours are part of the tourism product, is a popular thing to do.  That frisson of danger is something that attracts us, as does the natural beauty of such landscapes.

White Island’s moonscape, patchworked with yellow sulphur deposits, is like something from another world, and has been part of the Bay of Plenty region’s tour offering for many years, conducted with care and concern by tour operators. Of course, there are the waivers to sign, just as there are with many other activities around the world where there are safety concerns, including horse-riding, jet-skiing, snorkelling and diving. 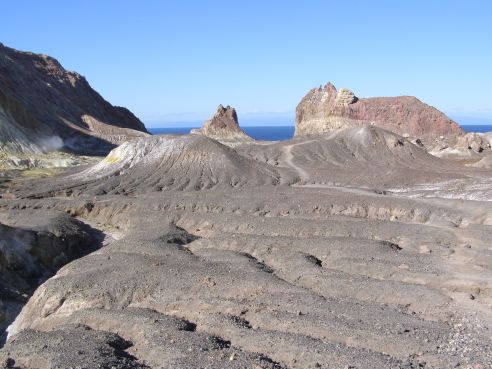 Earlier this year, after watching an episode of the terrific television series Coast New Zealand, which featured White Island, I posted one of my images on Facebook – and the response from followers was immediate, with many people sharing their memories (some from childhood) of their own visits.

As tourists (and travel writers) we make these decisions based on what we are told. In this case, scientists are saying it was difficult to predict that Whakaari/White Island would erupt. And some people will never visit a volcano “just in case”.

Would I go there again? I’m not sure. Perhaps twice is enough. That decision will have to wait. Meanwhile, like all New Zealanders and Australians, I’m holding the survivors and the families of all those affected by this natural disaster in my thoughts. Kia kaha. Stay strong.

12 Responses to “Walking on White Island: why we take such risks”