“Bir…bir…!” The half-formed word is accompanied by a chubby little finger, pointing to the sky. My grandson’s first word – other than those that mean his parents – is “bird”. At just over a year old, he’s fascinated by them.

And I’m both amused and a little bit thrilled by that, because I love birds too in all their colour and variety, and often I’m pointing my camera at them.

I had a chance to photograph some spectacular Australian birds when I made a return visit to O’Reilly’s Rainforest Retreat on the edge of Lamington National Park in south-east Queensland recently, including the gorgeous Regent Bowerbird (pictured above) that the retreat uses as its emblem. I’ve been to O’Reilly’s several times before but have never before been lucky enough to spot one.

This week is Bird Week at O’Reilly’s, an event held every November for the past 42 years. Bird lovers from around the world gather to spot around 200 species that live in the World Heritage listed national park that surrounds the retreat. There are talks and walks and a lot of clicking of cameras.

But any visit to O’Reilly’s is bound to include some wonderful sightings for bird-watchers. I got up for the daily early morning bird walk which is free for all O’Reilly’s guests (and $10 if you’re not staying there) and was rewarded not only with the Regent Bowerbird, but a host of others we encountered within a short walk of the main lodge.

One of the interesting things about the Regent Bowerbird is that the glossy gold and black feathers are only acquired by the male bird at four or five years old; a brown bird with an orange bill (like the one below) and yellow eyes is close to changing.  The female of the species is similar looking to a juvenile male, rather dull in comparison to her mate.

As the little group of guests wanders through the nearby forest, we’re treated to the sight and song of several beautiful small birds. 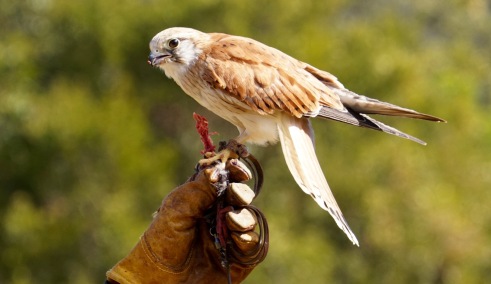 But you don’t have to go far at all to see birds at O’Reilly’s. They are everywhere you look, and some of them will even land on your balcony (or your head) to say hello. They are completely used to people and unafraid.

I may not have made it to O’Reilly’s for Bird Week this year, but that’s

no problem at all. It’s great to know there’s somewhere relatively close by that can provide a “bird fix” whenever I like.

I’m just looking forward to the day when I can take Ollie along to feed the birds at O’Reilly’s and hear him form that word perfectly.

A Glass Half Full stayed as a guest of O’Reilly’s Rainforest Retreat.