I’ve left the “do not disturb” on for a little bit too long, I know.  If I was in a hotel, the housekeeping staff would be checking to see if I was still alive!

Life and other work have got in the way of blogging this year, but I’ve surfaced now and I’m ready to resume transmission.

Some recent stays at hotels and resorts that had creative versions of “do not disturb” signs allowed me to add to my photo collection of some unusual ones I’ve seen around the world on my travels, which I’ve been keeping for a while now.

A little bit of quiet time in a hotel room is something to be treasured. There’s nothing worse than being interrupted while showering or napping by hotel staff knocking on the door (unless, of course, they are delivering champagne!).

So I’m a frequent user of the “do not disturb” sign, and I love it when a hotel allows me to say “please leave me alone” with a sign that also says something about the place I’m staying. 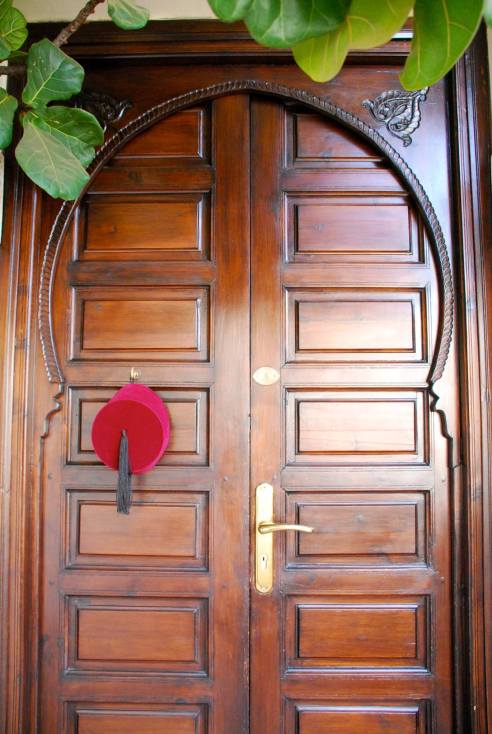 This is a wonderful example, from my first couple of nights in Marrakech, on a bespoke tour organised by Sydney-based Morocco specialist By Prior Arrangement. A red fez was provided as the “do not disturb” at the elegant Villa des Orangers, just one of many gorgeous riads we stayed in while travelling around Morocco.

Santa was the signal for snoozing at Santa’s Hotel Tunturi in Saariselka, Finnish Lapland.  Unlike other parts of Lapland, there seemed no other  connection with Santa here, except the hotel name (it’s part of a chain) and this “Do Not Disturb” sign. And behind that closed door was a private sauna in my bathroom!

One of the more unusual “do not disturb” signs I’ve seen was at the five-star Mia Resort in Nga Trang, Vietnam, where a sliding panel beside the door could be moved to show either this eyes-wide-open look or one that looks like a fast-asleep egg. Very creative…but just a little bit spooky?

Closer to home, the hip Tryp Fortitude Valley Hotel in Brisbane, adorned inside and outside with lots of huge murals by renowned street artists, includes a shot of an artist at work for guests to hang on the door handle when in need of “chill time”. 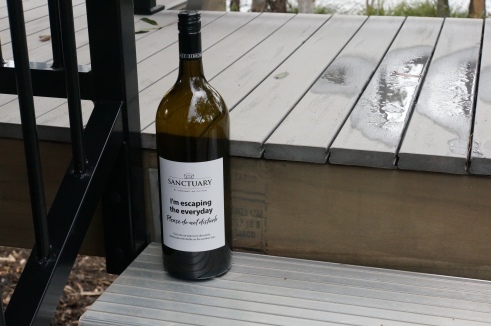 Queensland’s only “winery glamping” is at Sanctuary by Sirromet, on the outskirts of Brisbane, where guests are provided with an empty (but weighted) wine bottle to leave on the doorstep of your luxury tented pavilion when you want to “escape the everyday”. Clever, I thought.

One of my recent favourites was this cute sign – and the accompanying little sheep sculpture – at Treasury On Collins in Melbourne.  And there’s more to it than just being cute; the link is that the hotel is housed in the former Bank of Australasia, built in 1876, which had  strong links to Australia’s early sheep grazing and wool industry.

At the wonderfully-named Batty Langley’s in London’s Spitalfields, the signs are appropriately Georgian-style in keeping with the house and neighbourhood. And the rooms aren’t numbered, so you’re likely to be staying in a room named for a local character. In my case, I was in one named for Anna Maria Garthwaite, a designer and water colour artist whose work survives in the Victoria & Albert Museum. But part of me did wish I’d been in a room named for one of the more roughish characters: a tinker, a novelist, or an anarchist. Beyond the door you’ll find a 17th Century carved oak bed or a Georgian four poster, heavy silk curtains or wooden shutters, and lush furnishings.

On my most recent overseas trip, to Fiji, I found locally designed and made “do not disturb” danglers at two Ahura Resorts I stayed at.  This one – “shhh” is the word that springs to mind – was for the door of my lovely white beachfront bungalow at Malolo Island Resort. There was also a matching white sign with a silhouette of a cleaning lady on it.

At sister property, the five-star Likuliku Lagoon Resort, also on Malolo Island, the “do not disturb” was polished coconut shell on a hand-plaited rope, which perfectly matched the Fijian style rooms (and probably came from the island’s palm trees).

Don’t these all beat those boring little cardboard signs that so many hotels use?

Last but not least, a sign from the boutique Alex Hotel in Perth, Western Australia. This is very much in keeping with this smart 74-room hotel in Northbridge, which also tells guests “we don’t have a gym, but we have stairs!”.  It’s a great place to dream…

I’m still adding to my collection of Do Not Disturbs!  Do you have a favourite quirky sign you’ve seen on your travels?

9 Responses to “Do not disturb”