Even for those who aren’t church-goers, the great churches and cathedrals of the world hold a certain allure. They are quiet and beautiful spaces, respite from the tourist hordes.

In Finland’s capital, Helsinki, I found two of the most unusual chapels I’ve ever been inside. Both are in the city heart, both are Lutheran, and both provide a quiet and peaceful retreat for all-comers.

Commonly referred to as the “Chapel of Silence”, the Kamppi Chapel is a landmark in a corner of Helsinki’s busy Narinkka Square. A giant wooden sculptural building, it was designed as part of the World Design Capital program in 2012 and in its first year welcomed more than half a million visitors. I’m not sure what it reminds me of…a boat, an egg? Whatever it is, it’s quite extraordinary.

From a foyer area, a door opens in the windowless silence of this wonderful place. I slipped into a back pew as quietly as I could and sat for a while. There were only about half a dozen people there, sitting alone or in twos, some with eyes closed. The silence was immense. Not a murmur inside, not a sound from the world outside. Amazing.

From time to time, the door opened as someone arrived or left. That was the only sound. The room is almost bare but for the wooden bench seats and a simple silver cross, the curved wooden walls seeming to envelope you. Light beams down from a skylight on the rim of the 11.5 metre-high ceiling. Before leaving, I snapped one shot on my camera, the click of the shutter seeming horribly loud.

Regular church services are not held here, and the chapel, run by representatives of the Helsinki parishes and the Social Services Department (some of whom are on hand for those who need help) is ecumenical and welcomes everyone.  In the square outside, there’s evidence that help might be needed; a woman sits with a paper cup, begging for alms from the passing shoppers.

I visited the Chapel of Silence during my first few days in Finland. A week or so later, returning to Helsinki, I sought out another unusual church.

The “Rock Church” is one of Helsinki’s most popular tourist attractions. It has been quarried out of a natural rock outcrop, with the cave-like entrance revealing little of what might be inside. When I arrived, a large tour group was just leaving, some of them heading for the souvenir shops that cluster in the streets leading to the church.

Temppeliaukio Church (that’s its formal name) was built in 1969, and its interior walls are created by the bedrock. It has excellent acoustics, and is a popular venue for concerts. When I arrived, music was being played over speakers. There’s a large pipe organ on one wall, and rows of pews with bright pink, purple and blue seat covers. Visitors light candles in memory of their loved ones.

From above, light streams in from a skylight surrounding the glowing copper dome on the ceiling. A mezzanine floor caters for biggger crowds and gives a good overview of the whole chapel. There are about 50 people here, mostly clustered near the back of the church, but it’s still quiet and peaceful.

In the foyer, rows of leaflets offer “A word of greeting to take with you” in about 50 languages, from Albanian to Vietnamese. I’m not a church-goer (although I was raised as one), but look at the English ones and wonder if there’s a spiritual message here for me. I can’t find one without the words “God” or “Jesus”, so decide to just take a random pick and pull one from the middle of the pack. “Pour out your heart to God your father,” it says. “He understands you better than you understand yourself.” 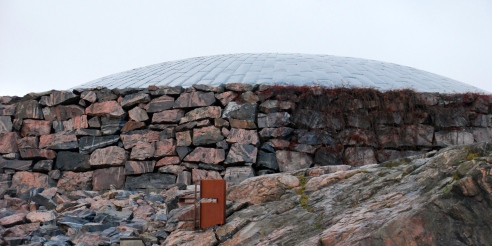 Outside, it’s raining lightly, but I take a walk around the block on which this massive rocky outcrop sits. The streets are lined with apartment buildings, a woman walks her dog, and there’s a children’s playground directly behind the church. Paths lead up to the glass dome that shields the roof, and it looks like the kind of place families might picnic. A bare tree is silhouetted against the sky, growing from the rock. 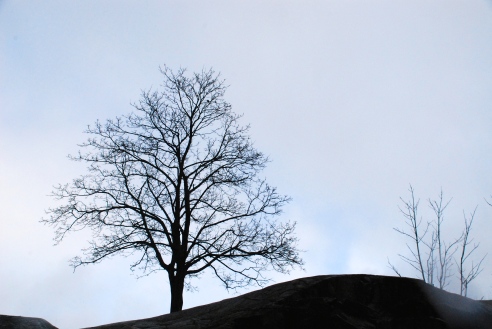