The pudding bowl is on the table, filled with luscious dried fruit and glace cherries, soaked in rum. As my daughter and I arrive for the family Christmas tradition of “pudding day”, there is much excitement over the breaking of a double-yolker egg.

That must be good luck! An omen that this Christmas pudding will be a great one. 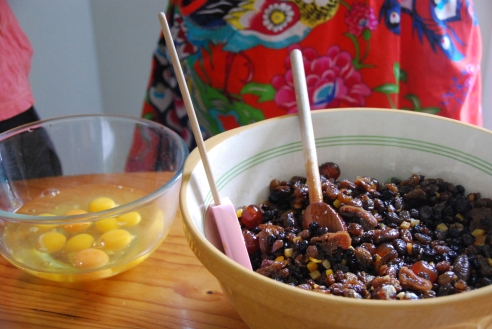 Soon we are involved in each step of making the pudding. The eggs and butter are beaten. Small faces – the youngest generation of four in the room – are pressed close to the proceedings, eyes wide. Their uncle Matt is in charge of the wooden spoon; a bit of muscle is needed to stir this mixture.

More ingredients are added: brown sugar and treacle. The kitchen is full of rich spicy fragrance, mingled with the aroma of rum in which the fruit has been soaking. Glace ginger and slivered almonds are added to the fruit mix. Flour is sifted, and the fruit tipped into the wet mixture. More stirring. 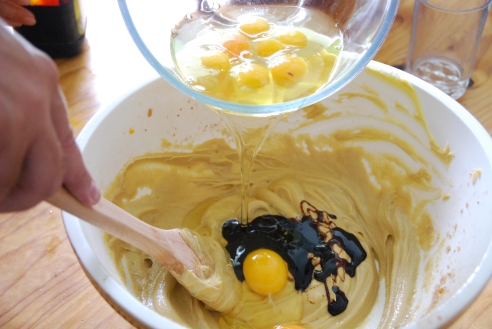 There’s a recipe, of course, but this pudding-making is no ordinary event. This is a family tradition handed on over generations, and with it comes important rituals, overseen by 81-year-old Esme, whose grandmother and great-grandmother before her have passed them down. 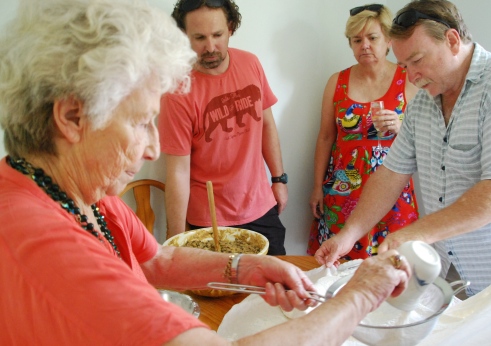 Silver sixpences are produced. Dulled by years of use (and saved for just this purpose after the advent of five cent pieces made of nickel and copper), they are handed out. We each get a sixpence to make a wish on as we put it into the pudding mix. 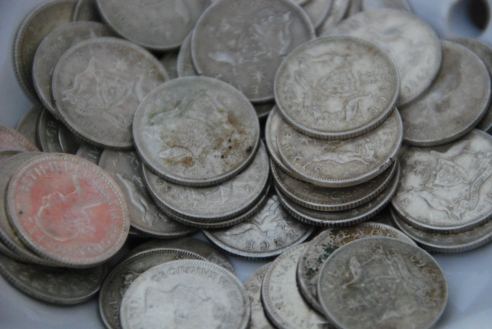 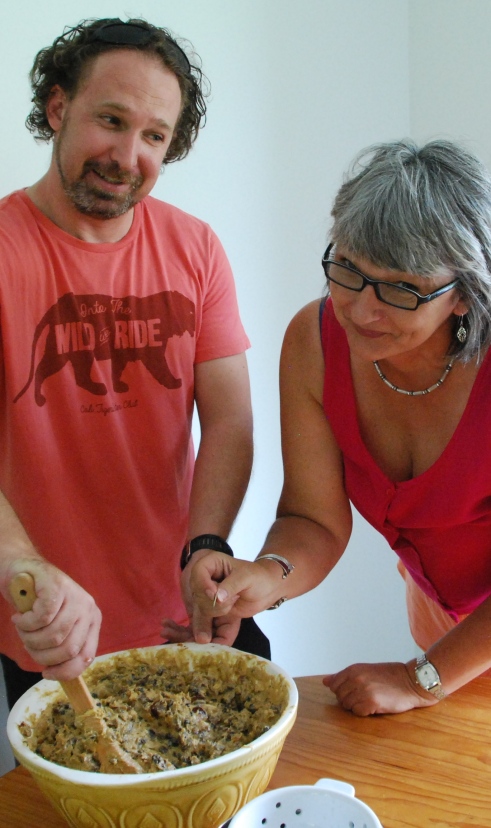 My nephew Matt stirs, as I add my sixpence.

Some of us add sixpences for absent family members. “This one’s for Christine,” says Paul, for his partner doing family duties elsewhere today. “For Sophie,” I say, tossing a coin in for my Melbourne-based daughter. “For Charli and Chrissy,” says Matt, his wife at home looking after their sick daughter. “For Melita, for Maddie.” Around we go…I add another silently, for my late sister Anne, whose children and grandchildren I’m here with. 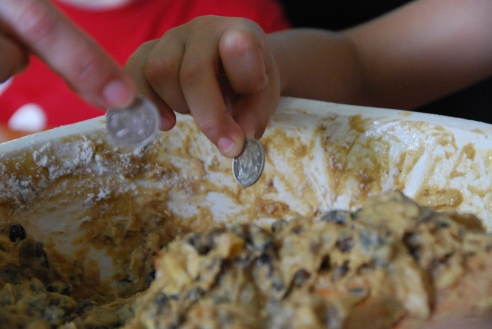 Then there’s more stirring. The littlest members of the family join their great-grandmother to stir, and everyone who wants to gets a turn. 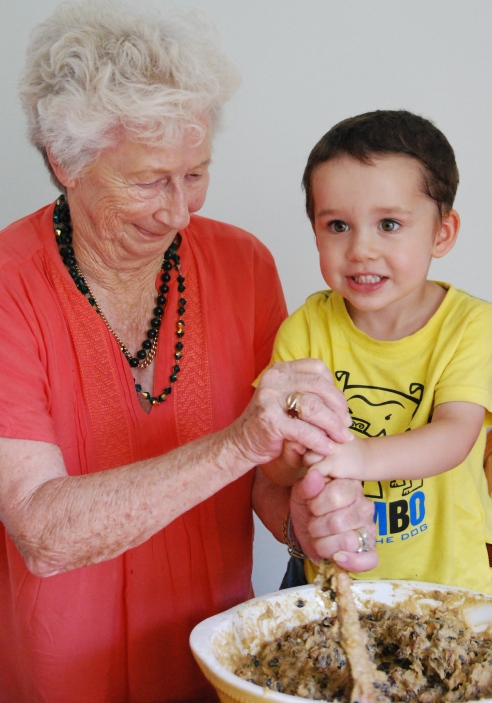 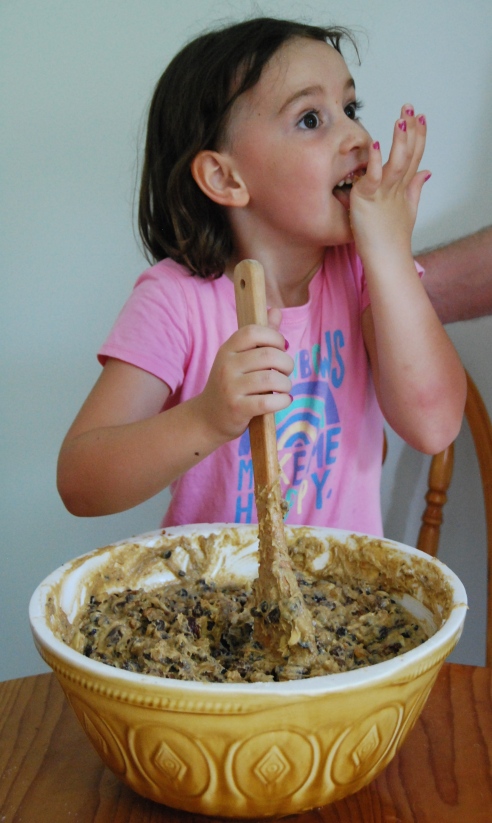 A swathe of calico cloth comes out. It’s time to wrap the pudding. Esme enlists her sons Paul and Michael to help wrestle it into shape. Five-year-old Keira holds the white ribbon that will tie the top. It’s done! 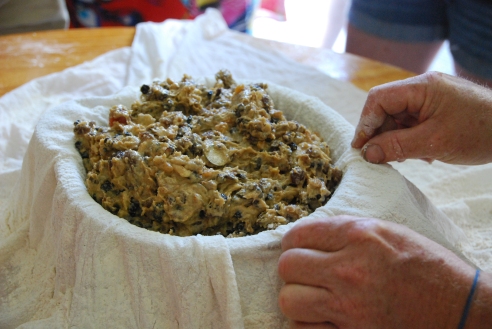 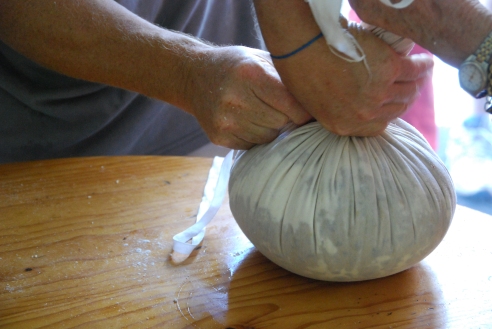 Just one more tradition: the wrapped pudding is held out to each person, to be patted. Small hands and large complete the task, and the pudding is finally ready for the pot, where it will boil for about four hours.

One final thing must be done. There’s a bowl to be licked! Michael carries the bowl around and fingers trace through what’s left of the mixture, delicious even raw. 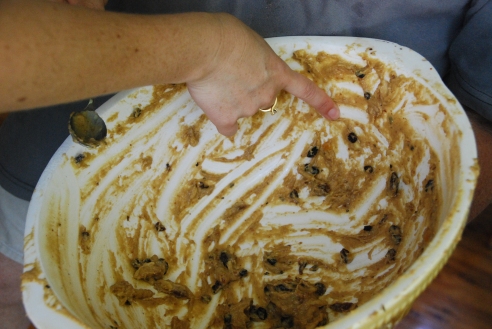 Champagne is poured, beers opened, and we retire to the shade of the garden for lunch. Another successful pudding day achieved.

“It’s from Dorset,” says Esme, when I ask her about the pudding recipe and tradition. “And of course, there’s another ingredient too – love. And there should be no arguments on pudding day!”

I’m asking questions because this is my first family “pudding day”, despite the fact that I’ve been part of this extended family for many years. Not everyone makes it every year, just those who are available, and somehow it’s eluded me until now.

Modern families come in all dimensions, and ours is no different. Over the years, our family has changed size and shape, losing and gaining members; there have been births, deaths, divorces, new partnerships and marriages.

The ties that bound us in Paul and Christine’s kitchen today were different for everyone. Some of us by birth, others by choice, connections made with each other through those closest to us and bound tighter as the years have passed. The pudding made with love will be shared on Christmas Day, by some of those in the room today and by others who were not – family and friends.

Families have many branches, and this year my daughters and I will be spending Christmas with my mother and family, in my hometown in New Zealand. But as we left today, with hugs and kisses all round and wishes for a happy Christmas, Paul assured me: “We’ll keep some pudding for you!”

I’ll be holding him to that!

10 Responses to “A Christmas pudding made with love”