“When a man is tired of London, he is tired of life.” So wrote the 18th century essayist and poet Samuel Johnson. He could easily have said “woman” instead of man. I know I will never tire of London, no matter how many times I visit.

Going back this year was like visiting an old friend. I spent several years living there on my first big travelling adventure as a 20-something, and this wonderful pulsing city holds a special place in my heart. My links with London are tenuous now, all the friends I knew in those long-ago days have either moved on – to less hectic lives in other parts of the UK – or moved home to Australia and New Zealand.  And it has been a decade since my last visit to England. But the old mansion flats where I lived, the pubs where I would meet my friends, and the church where I got married are all still there, providing lasting links that bind me to London.

The Cross Keys at Hammersmith, an old haunt. I found myself staying next door!

But at the same time as I trip down memory lane, I’m aware that London has also changed a lot in recent years – and for the better, I think! It’s got a buzz about it, there are lots of new things to see – as well as the traditional attractions – and a modern vibe that I love.

Inside the tube station at Tottenham Court Road.

I only had a couple of days to spend there, but I revelled in today’s London. I walked along the Thames embankment, rode the Tube to get around, and ate alone in friendly pubs. I saw a few sights, but mostly I just enjoyed soaking up the little bits of London that I found myself in.

Getting around by tube is so easy.

I had “High Tea” at the ever-so-swish new Sanderson Hotel in Fitzrovia, gazed in antique shops in Chelsea, soaked up an English country garden, and I remembered how wonderful this city is. The sun shone too, which added to my joy in being back.

In the lobby of the trendy Sanderson Hotel. I wasn’t staying there!

So while I was a tourist – and felt like it at times – there is always a sense of homecoming when I get to London, rare though those occasions are. It fits like a comfortable shoe.

Fancy footwear on the tube.

So this is not a travelogue, just a little wander through some random streets of London. Here are a few more images. Go there sometime – you will love it!

Twenty-one Egyptian style benches were installed along the Chelsea Embankment in 1874.

Statue of Sir Thomas More on the Chelsea Embankment. 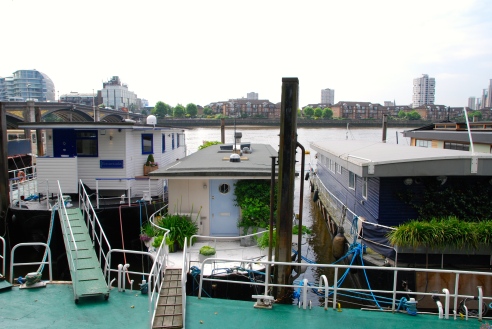 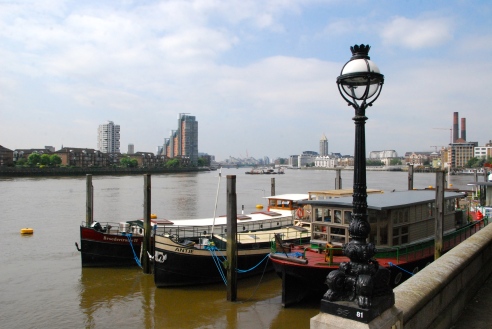 Houseboats on the Thames near Battersea Bridge.

How much is that doggy in the window?

12 Responses to “My love affair with London”