Sydney shimmered in the sunshine when I arrived today.  This is truly one of the world’s most beautiful harbours, and definitely one where you need a room with a view.

I’m in Sydney for a couple of days with my daughter Jess.  Tomorrow evening we’ll be setting sail aboard the Queen Mary 2 to sail back to Brisbane.  But for now, we’re enjoying the sights (and for me, doing a bit of research work). Jess hasn’t been to Sydney since she was about seven years old, so we’re really enjoying playing tourists.

And we couldn’t have wished for a better base to do so. Our hotel, Pier One Sydney Harbour (part of Marriott’s boutique Autograph Collection) is literally right on the waterfront. It even has its own private pontoon, and I saw a guest dropped off by a yacht this afternoon when I was out enjoying the view. 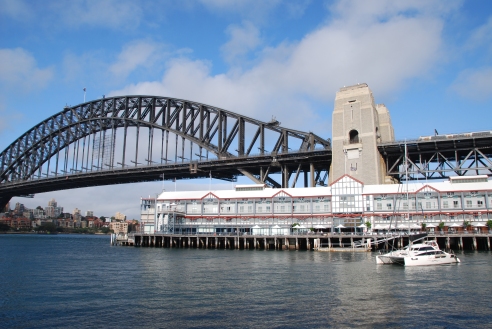 But if you arrive by air – as we did – it’s an easy spot to get to. Just take the train to Circular Quay, then (if you’ve got hand luggage only) walk around the waterfront towards the Harbour Bridge and you’ll be at the hotel in less than 10 minutes (depending on how many photos you stop to take).

The hotel is right beside the Sydney Harbour Bridge and a minute’s walk underneath it and around the corner puts the Sydney Opera House in full view. It’s a spectacular location, right in The Rocks, the city’s historic heart.  It’s also close to many of the city’s major attractions, including the Museum of Contemporary Art (currently showing a Yoko Ono retrospective).

Our room is at the back, with a view of the street, the far end of the base of the bridge, and some of the convict-built sandstone walls that are a common feature of The Rocks. The hotel’s full tonight, so a water-view room will have to wait for another time.

The rooms have a vaguely nautical theme, in blue and white, but it’s the corridors that I love: they feature original timber and ironwork that were once part of the historic Pier One Wharf, on which the hotel was built. 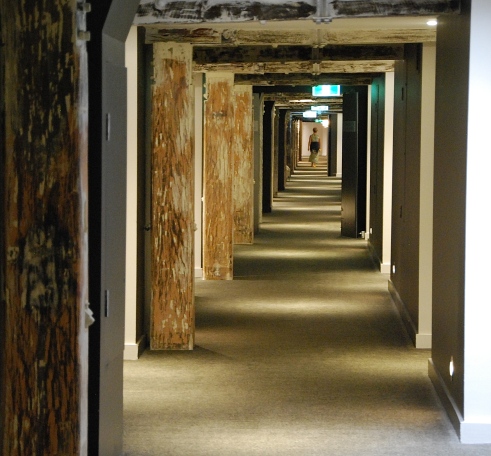 The restaurant areas are chic and inviting, all with water views out onto Walsh Bay. Or you can sit outside on the old wharf itself.

Tomorrow, we’ll do some more sightseeing and then walk back around to the Overseas Passenger Terminal at Circular Quay, where many cruise ships berth while in Sydney, to board the QM2 and start the next part of this adventure. It may only be a short visit to Sydney this time, but we know we’ll be back again soon.

A Glass Half Full was a guest of Pier One Sydney Harbour, Autograph Collection

7 Responses to “Perfect positioning at Pier One”