Boots and shoes, gloves for washing the dishes, hoses for watering our gardens, tyres for our bikes and cars, rubber bands, mats for our cars and doorsteps, rubber balls, rubber ducks for our bath-tubs. Erasers for school. Rubber stamps. Wet suits for divers. Toys. Belts, watch straps. The list could go on and on…

They’re all made of rubber, a material that we take for granted. We use it every day, without thought; an integral part of modern life.

And let’s not forget those other “rubbers”; condom sales – and the demand for rubber – skyrocketed during the worldwide campaigns to reduce AIDS infections during the 1980s.

Rubber is now a modern convenience that we barely give a thought to. But I was stopped in my tracks on a visit to southern Thailand last week, when I visited a rubber “factory”.  It was part of a tour available to guests at the Koh Yao Yai Village resort on Koh Yao island, located in the Andaman Sea, between Phuket and Krabi. Thailand is one of the world’s three largest producers of rubber, along with Indonesia and Malaysia. Together they account for about 72 per cent of all natural rubber production.

The “factory” was not at all what I was expecting. It was a small, open-sided shed in a clearing in the rubber plantation. The process seemed simple…but very hard work, especially in the heat and humidity.

First, we stopped to try our own hands at “tapping” a rubber tree, using a sharp hooked blade to skim the bark off the tree, releasing the milky white latex, which drips into a cup attached to the tree with a wire. It’s harder than it looks. 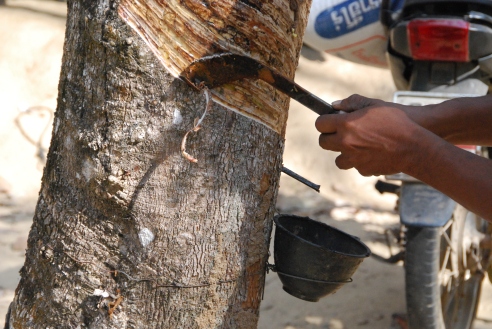 Then we moved to the “factory” where workers were pouring the latex from large tubs, and rolling it out like dough on the ground. It looked like hot, strenuous, dirty work. 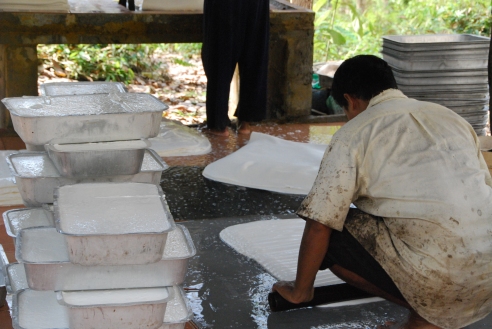 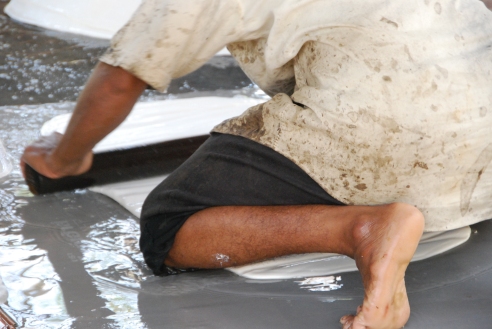 The sheets also go through a wringer, a bit like my mother’s old washing machine used to have – only bigger! I wonder how many get their hands caught at some stage. 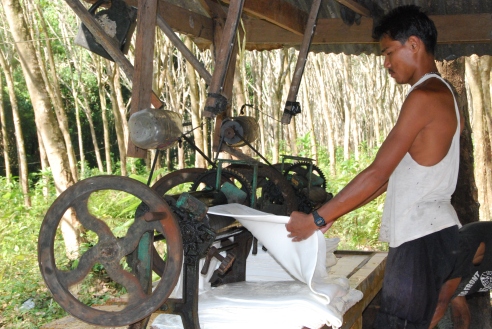 The sheets of rubber are then hung out to dry. We saw this not only here, but in a village further along the road as well, and elsewhere on our travels through this part of southern Thailand. The rubber darkens as it dries. 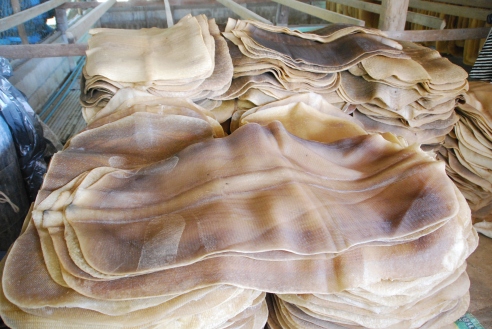 At the end of this part of the process, the latex sheets are sent off to larger factories where they are cleaned and prepared for further production, ultimately becoming those many useful or decorative things that we all use in our daily lives.

So next time you float a rubber duck in your bath, splash through puddles in your rubber boots, or throw away a rubber band…think about where it came from. I know I will.

8 Responses to “Regarding rubber”