For the past 28 years, the Woodford Folk Festival has been an end-of-year tradition for many Australians. Beginning life in Maleny in the Queensland’s Sunshine Coast hinterland, in its early years it was as well known for its wacky, hippie atmosphere as for the music.

Outgrowing its original site, the festival moved to Woodford a few years ago and is now established as one of the best festivals in Australia, attracting big names in music and literature as well as emerging talent and colourful buskers…but without losing the fun and relaxed atmosphere that make it so popular.

Woodfordia – the festival site, rather than the nearby town of Woodford – is a spectacle, an experience, a feeling as much as a place. Woodfordians come in all shapes and sizes and colours, including hundreds of volunteers who help with the practicalities of the event, festival-goers of all ages from all over the world, musicians, caterers, artists, dancers, circus performers, and more. Some people camp out at the festival, others come just for the day. More than 2000 artists and presenters take to the 28 stages around Woodfordia over the festival’s six days. Then there are the workshops: learn a new craft, belly dance, juggle, join a singing lesson, fight for Slam Poet domination, make a lantern, learn yoga or meditation.

Woodford is just an hour’s drive from my home in Brisbane. I joined the “day festivillians” who braved a 40-degree day (capped off by a huge thunderstorm) on day three. This is just a taste of what I saw.

BEATING THE HEAT: Parasol or umbrella? Wet sarong over the head? Spray yourself with a water bottle or stand under the hose held by helpful volunteers! 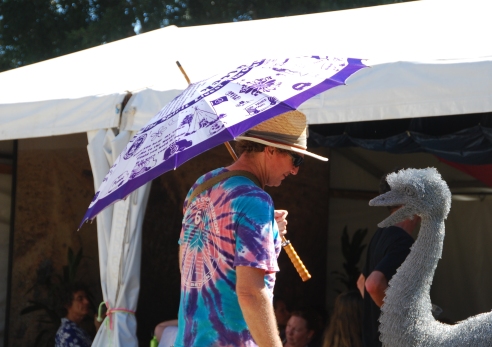 MEETING A MONSTER: The theme of this year’s festival was all about meeting your personal monsters head-on.  “Our idea this year is to bring those monsters out into the open, take a good look at them and drown them with love, dissolving the fears that created them,” said festival director Bill Hauritz.  He quotes Mahatma Gandhi: “The only devils in the world are those that run around in our own hearts and that’s where our battles should be fought.”

CATCHING SOME MAJOR TALENT:  In Bluestown, 16-year-old Australian guitarist Josh Needs wowed the crowds with his virtuosity; country star Beccy Cole played one of her two gigs at the festival in the Concert tent; and – okay, I confess – I missed the names of the performers who had these unusual instruments (and also what the instruments were called – which someone out there must know!) because I was buying a couple of beers at Bill’s Bar. 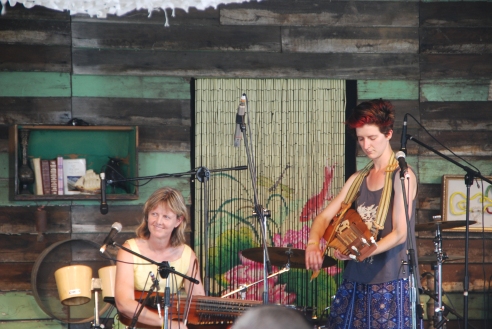 BUYING BEER AT THE BAR:  You won’t go thirsty at Woodfordia. Among the many bars to choose from, Bill’s Bar is always a favourite, this year with a striking statue at the entrance, and a wonderful chandelier made from piano keys. Another popular haunt is the Pineapple Lounge. 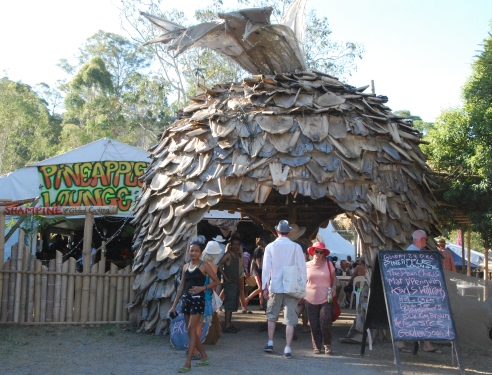 LEARNING ABOUT INDIGENOUS CULTURES: First Nations are represented at Woodfordia too. The traditional custodians of the festival land are members of the Jinibara Nation.  The Jinibara people, registered Native Title Claimants for the Woodford area, are descendents of Jowalmel, born in the 1840s in Woodford and Wangiramu, born in 1826 in nearby Kilcoy.  The image below is of an installation called “Imagine the Land” created using earth pigments from the local region and based on ancient techniques of the mandala and the medicine wheel.

BUMPING INTO BUSKERS: As well as the formal program, you’ll find music and musicians at almost every turn.

WRITING A LETTER: “The Lettering House” is a post office with a difference. You can send a normal letter, with a stamp on it, or you can pen a letter to anyone at all (ie, “The brunette with the lovely smile”) and entrust it to the Woodfordia postie to deliver to…well, anyone they choose, really.

FLUTTERBY A BUTTERFLY: Butterflies are everywhere. This one’s a volunteer, but the real things are around too…you’re most likely to see them somewhere along the bush path that leads to the festival entrance (and there are helpful signs to tell you what they are).

FAMILY FUN: Woodford’s for everyone…

FINDING A SHADY SPOT: A tree, a tent…shady places were in demand. 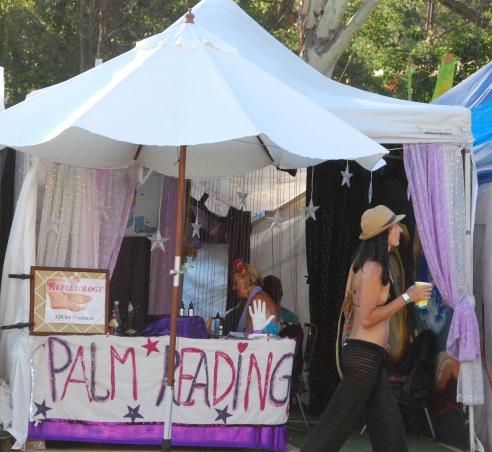 Missed it this year? Plan ahead and make sure that one year soon you head to Woodford in late December. It may be as hot as Hades, or it may bucket with rain…but the music and the atmosphere will ensure you’re not sorry!

A Glass Half Full was a guest of the Woodford Folk Festival.

6 Responses to “What I saw at Woodfordia”