I was a cowardly parent – at least when it came to teaching my daughters to drive. I happily left that to their father!  Our eldest took to it with relish; the moment she was old enough she was attaching her L plates and in the driver’s seat. Polished off by a few sessions with a professional driving school teacher, she passed her test with flying colours and independence was hers.

A bit self-conscious at the wheel…my baby preparing for a driving lesson a few years ago.

Her sister had no desire to drive. She had a few lessons, then declared the bus or train would do her. To me, driving is the ultimate freedom (something I’ve never taken for granted again after living in Saudi Arabia – where women are not allowed to drive – for two years during the mid-1980s), and I’ve never really understood her reluctance.

I love a road trip and so does my eldest daughter. A few years ago, we drove together from Melbourne to Brisbane (about 1700km) – taking turns with the driving and having a wonderful time. Earlier this year, we travelled separately to New Zealand for a family wedding and because of the travel plans she wanted to hire a car. But being under 25 (just), the surcharges imposed by rental companies made it so expensive that she abandoned that plan and hitched a lift with someone else.

Drivers under 25 have always had it tough when trying to rent a car. But this week Hertz Australia removed the surcharge for drivers aged 21-24 for the summer holidays (until January 31).  So whether it’s a holiday road trip, heading to a music festival, or a trip “home” for Christmas, young travellers won’t have to worry about stretching the budget further to meet that extra cost. What a great idea! 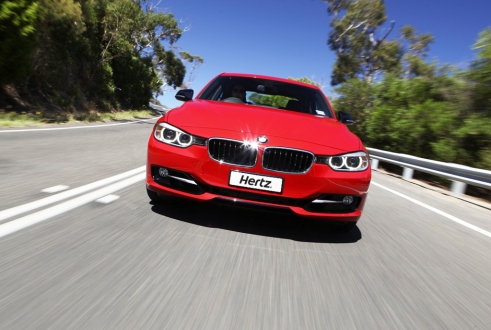 Even a luxury BMW is within rental reach of young drivers with Hertz’s new policy.

The Young Renters promotion applies to all Hertz rental classes including its specialty ranges, which includes cars like the high-performance Toyota 86, the Green Collection of environmentally friendly cars, a luxury BMW (ah, that sounds like the one for my girl!) or a trendy/retro Mini Minor.  That brings back memories…my first two cars were Minis!

After the surcharge-free period, the standard surcharge for drivers aged 21-24 years old will be reduced to $16.50 per day. Book online and quote the CDP code 2013210 which will remove the surcharge.

My older daughter is now already 25, and the younger one still hasn’t got her license. But for others out there…it’s a good deal!

6 Responses to “Getting in the driver’s seat”