Airline food. We love to hate it.  And let’s be honest, it can range from non-existent to downright awful or not-too-bad-at-all…usually depending if you are at the pointy end of the plane or down the back. And depending on the airline.

Airlines  have tried to lift their game in the culinary stakes in recent years, some of them with a good degree of success.

When I took one of the first new direct flights on Hawaiian Airlines between my home city of Brisbane and Honolulu this week, I hadn’t given much thought to what the food might be like. And – being honest again – it really wasn’t anything to write home (or here) about.  There was no choice – not even the usual “chicken or beef” – and while it filled a gap it was pretty standard airline food. I was in the Main Cabin (that means economy class)…but it might have been different if I’d been in Business Class.

I say this because on the ground in Honolulu, last night I dined at Chai’s Island Bistro, one of Hawaii’s top restaurants.  Owner/chef Chai Chowasaree is the executive chef for Hawaiian Airlines, creating the menu for its Business Class passengers.  And if the food at his restaurant is anything to go by, those travellers in Business Class will be well served. 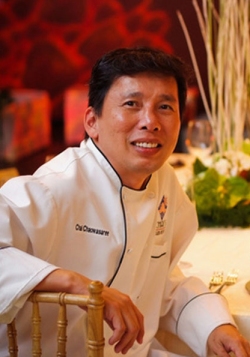 As we pondered the menu, the smiling Chef Chai came out to greet us and suggest that we share a few appetisers. When they arrived, it was as a wonderful array of tastes, all beautifully presented. One of our group is gluten-intolerant and was thrilled to find the menu marked with gluten-free dishes – and a lot of them! (A different story to her airline experience, where she had to bring her own food on board because they could not cater to her dietary needs. Apparently that’s not uncommon among airlines).

For my main course (what Americans confusingly call an “entree”), I chose lemongrass and garlic crusted veal tenderloin with a Merlot demiglace, served with smashed potato and Asian stir fried vegetables (carrots, baby corn and sugar-snap peas), which were crisp and tasty.  Everyone else’s food looked just as good.

So if you’re flying on Hawaiian Airlines, and can afford Business Class – do it. If only for the food. I wish I could.

The other option, of course, is to linger over dinner at Chai’s in Honolulu. I hear on the grapevine the restaurant is moving location in the next month or so…so be sure to check first.

A Glass Half Full travelled to Hawaii as a guest of Hawaiian Airlines. 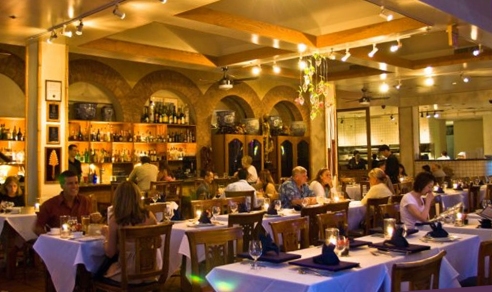