On a Wednesday afternoon in March 1965, Merle Thornton and her friend and fellow feminist Rosalie “Ro” Bognor walked into the public bar of a Brisbane pub and ordered a lemonade each. So what? I hear you ask.

Well, in the 1960s it was illegal for women to be served in the public bar of any hotel in Queensland.  When they were refused service at the Regatta Hotel and asked to leave, Merle and Ro promptly chained themselves to the footrail of the bar and refused to budge.  They were about to make a huge statement on behalf of womanhood.

Last week I helped celebrate the official re-opening of the Regatta, which was badly damaged in the 2011 flood that ravaged the city.  I was thrilled to be invited, but I had another special reason for wanting to be there. The guest of honour at the pub’s celebrations was Merle Thornton and I was keen to hear the story of that day in 1965 from the woman herself.

Now 81, Merle was clutching a glass of champagne when we met. Was it really lemonade they had ordered on that famous day? 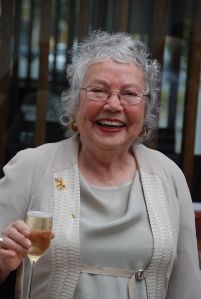 Merle Thornton at the re-opening of the Regatta Hotel. Photo: Tommy Campion

“Yes,” she said. “We were testing the law, and the law said it was illegal to serve alcohol to women in a bar.  It did not say women were not allowed in bars; that wording was a way of allowing them to still employ barmaids, because they would have had to pay bar men more!”

When the two young women made their stand, the cops were called.  Two “rather baffled” uniformed policemen arrived first, but left when they failed to persuade the protesters to go quietly. Soon afterwards, two plain-clothes policemen from the Licencing Branch arrived.

“One of them…” said Merle, pausing slightly for dramatic effect (perhaps that’s where her actor daughter Sigrid gets her talent) “…was Jack Herbert!”

The notorious bagman, later a key figure in Queensland’s Fitzgerald Inquiry into police corruption in the late 1980s, had no better luck than his uniformed mates.

“Herbert bullied and cajoled us for about an hour, but finally they left, saying ‘so long, girls, have a good night, don’t drink too much’, ” recounted Merle.

And of all the pubs in Brisbane, why did they choose the Regatta for their protest? “Oh it was simple, the ABC TV studios were just a few doors down the road and we timed it to suit the evening news!”

Despite the publicity, the law did not change for another few years. “But what was really important to me was that people  ‘got it’ straight away,” said Merle, adding that the support lead to many Equal Opportunity reforms and the end to a ban on married women being employed in the Public Service.

To prevent the possible repetition of the stunt, the pub removed the footrails.  But as part of a $10 million restoration and renovation project over the past 18 months, the footrails have been returned to the front bar. “I was very happy to see them back!” said Merle, as she switched from champagne to accept a Peroni from a well-wisher.

So next time you’re enjoying a drink in a Queensland pub – especially if you are a woman – raise a glass to Merle and Ro and all the fabulous and feisty women like them who made their voices heard in many ways to pave the way for the generations after them.

9 Responses to “Raising a glass to Merle and Ro”