Turning off the lights – and electronic devices – for Earth Hour is something I’ve done intermittently over the past 13 years since this symbolic lights-out event was founded in Sydney by WWF Australia.

Held every year since 2007 on the last Saturday of March, Earth Hour now engages millions of people in more than 180 countries and territories, a collective action to draw attention to climate change and show support for our planet in a demonstration of energy-saving.

So for one hour, from 8.30pm (but in different time zones, depending where you live), we are asked to turn out our lights, put a match to candles, and find a way to spend an hour in darkness. In the early years of the movement, the skylines of major cities looked dramatically different for that one hour; in more recent years, the impact seems to have lessened. Perhaps it’s just me, but fewer people seem to even know it’s happening and the media coverage much less.

Nevertheless, I decided last night to make my own small contribution to Earth Hour. Other years, my favourite way of spending Earth Hour, especially if I was alone, was to run a bath, light some candles in the bathroom and have a soak. Not for a whole hour, though…who could do that? 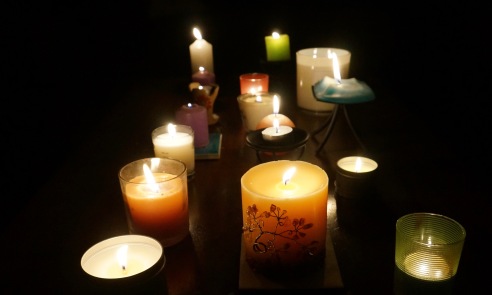 This year, I took almost every candle in my cupboard out and lit them. Then I sat on my balcony with a glass of wine and listened to the sounds of Saturday night. I’m in self-isolation from my partner, and with COVID-19 keeping many people at home, I wondered what other people were doing. Quite a lot it seems.

What did I hear? Traffic noise. A screech of tyres. The rustle of next door’s resident possum moving through the trees. A barking dog. And another. Distant country music, and laughter. The chirp of a gecko.

My neighbours’ lights were all on, and light from my apartment block illuminated the white trunk and branches of the gum tree in the corner of our garden. A moth fluttered toward the light of the lantern on my balcony.

The sky was dotted with stars, just a few visible. No moon, and no aircraft. I live not far off a flight path, and passing planes are noticeably absent these days. The quiet skies got me thinking about some of the dark, star-studded skies I’ve seen on my travels, most notably in the Australian outback where the lack of ambient light makes the heavens burst with life. There’s no sight more awesome than the Milky Way blazing across the black sky.

When travel is allowed again, I’d love to head to some of the world’s Dark Sky reserves, parks and sanctuaries, places where the quality of the starry nights is protected. The International Dark-Sky Association (IDA), the recognised authority on light pollution and how to combat it, assesses these places based on their exceptional quality of starry nights and nocturnal environment and protects them for their  scientific, natural, educational, cultural and heritage value, as well as for public enjoyment.

There are Dark Sky places all over the world: 80 Dark Sky Parks, most of them in the USA, 16 Dark Sky Reserves and 11 Dark Sky Sanctuaries, a category for some of the most remote places on the planet.

I was happy to find there are a few in Australia and New Zealand, in places that I’ve been to in daylight and now want to return to at night.

In Australia, The Jump-Up in far western Queensland, is part of the Australian Age of Dinosaurs attraction. It has sanctuary status, along with New Zealand’s Great Barrier Island, off Auckland, and Stewart Island/Rakiura, at the southern tip of the country. Another sanctuary I’ve visited is Pitcairn Island, which claims the title of the most remote place in the world,  far out in the Pacific Ocean.

Among the many Dark Sky Parks in the world, Australia has only one, Warrumbungle National Park in central New South Wales, which in 2019 became the southern hemisphere’s first. Warrumbungle Observatory, owned by the wonderfully appropriately named Peter Starr, is located on the outskirts of the park, about 9km from the town of Coonabarabran, and holds viewing sessions and astro-photography. The national park is also a popular camping spot (currently closed). 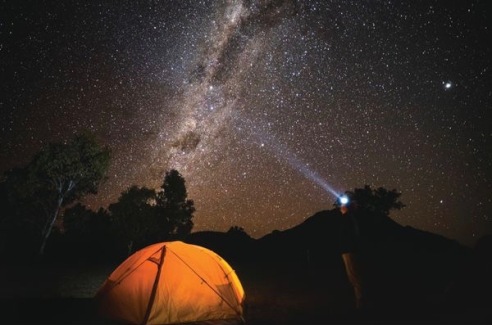 South Australia’s River Murray is a Dark Sky Reserve, as is Aoraki/Mackenzie in New Zealand’s South Island. Covering more than 4300 square kilometres of the Mackenzie Basin and the Aoraki / Mt Cook National Park, this is the world’s largest dark sky reserve. 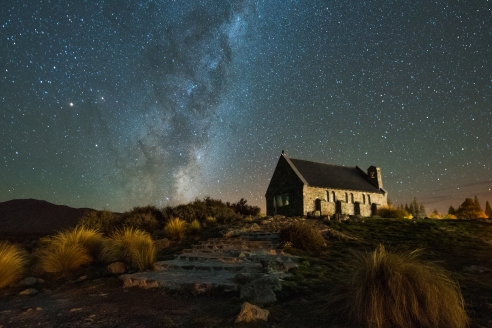 Earlier this year, the tiny Pacific island of Niue became the world’s first Dark Sky nation. Niue is among the least visited countries in the world, with flights only (usually) twice a week from Auckland with Air New Zealand. On my list when travelling is once again on the agenda.

But until that happy day arrives, we can all go stargazing, as I did last night, in our own backyards. It might not be as spectacular as a Dark Sky place, but there’s still something wonderful about looking up into the vast universe in which we live and realising how insignificant we are. That’s what I thought last night in my quiet, candlelit hour. I think I’ll do it again next year.