The last thing most of us want when planning a few days away in the countryside is rain. But when the heavens opened last week, just as we were heading off, it was the best gift that Nature could give us.

Our destination, just two-and-a-half hours drive south-west of Brisbane, was Stanthorpe in south-east Queensland’s Granite Belt, an area so parched by a long drought that the dams are dry and water is arriving in huge tankers, at considerable cost.

So the smiles were wide on the faces of the people of Stanthorpe when we arrived and the joy at the rain was palpable. This is a region that – if it’s possible – needs rain more than most places. It needs it to grow the crops for which it is well-known…strawberries, apples and the grapes that make this Queensland’s premier wine region. 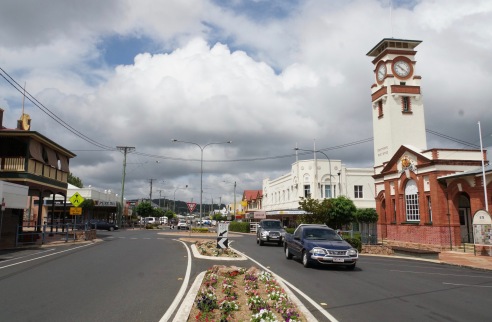 The main street of Stanthorpe, with promising clouds overhead.

Water restrictions have been in place for some time and residents are required to limit their daily usage to 80 litres per person (that’s around eight large buckets worth). As we arrive in town, tankers are pulled over and large signs on the highway declare “emergency level” restrictions.

Water is being trucked into Stanthorpe.

We’ve had some doubts about whether to come. After all, won’t visitors be using up precious water that the residents need – and are having to pay for? It’s a question that’s soon answered by our hosts.

“In a region where tourism is so important, we need to have the flow of visitors. If there are no visitors, there are no jobs, and that can happen very quickly, particularly in hospitality and tourism,” says Krista Hauritz, who handles marketing for the region.

The last “real” rainfall here was in March 2017. Water restrictions came into force last August, and in September bushfires ravaged much of the area, licking the outskirts of Stanthorpe and destroying four homes. Fires closed the highway into town intermittently during December and January, keeping more visitors away.

Fighting the fires used up more of the precious water supply, and by January Stanthorpe had run out. It was only three weeks ago that rains finally fell.

Raindrops on the “welcome” sign at our villa at 31 The Rocks.

But the people of the Granite Belt – farmers, winemakers, retailers, hoteliers and everyone else who relies on tourism for their business to thrive – want it known that it’s not all doom and gloom, despite some of the toughest years in memory.

And a few days in this lovely region soon reveals a great variety of things to see and do. Bring your appetite with you, because the excellent food and wine offerings are plentiful and hard to resist. 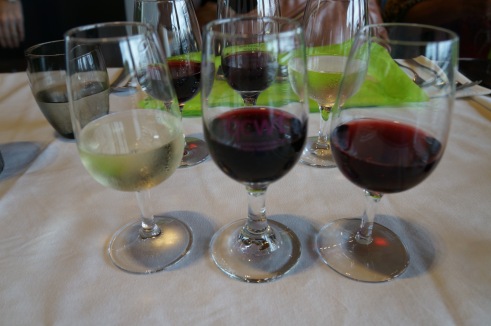 The Granite Belt has 35 wineries to choose from.

Our first stop is for morning tea at Sutton’s Cidery & Juice Factory at Stanthorpe, just opposite the “big apple” on the highway. With our coffee, we order huge slices of apple pie, with a generous scoop of ice-cream on the side, then browse the groaning shelves of apple juice and ciders. 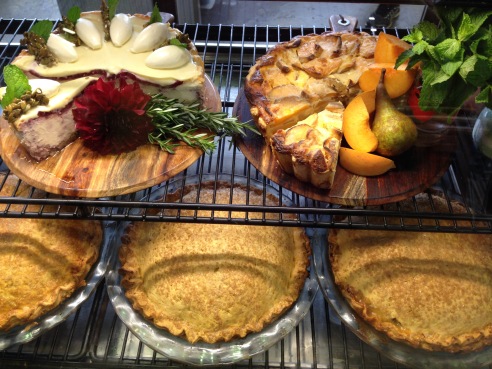 It sets us up for some apple-peeling and grape stomping, two activities that visitors to the annual Stanthorpe Apple & Grape Harvest Festival can take part in. I win second prize in the longest-peel contest for our group but come nowhere near the record 5.1 metres (yes, from one apple!) set by local Kerrie Stratford, who has held the title for 15 years. 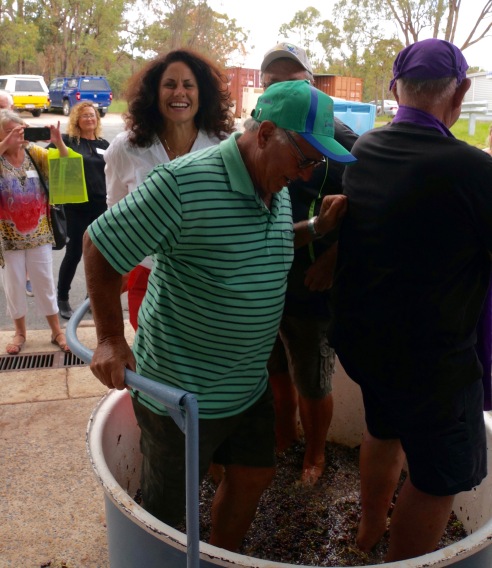 The festival, running this year from 28 February to 8 March, and now in its 54th year attracts around 80,000 visitors to town – and the locals are hoping that won’t be different this year.

Then we head off for some strawberry picking (and tasting) at Ashbern Farms, where owners Ashley and Brendan Hoyle welcome visitors to their 10ha of land.  You can pick your own to take home, or just pop in for a parfait, ice-cream or other strawberry goodies. 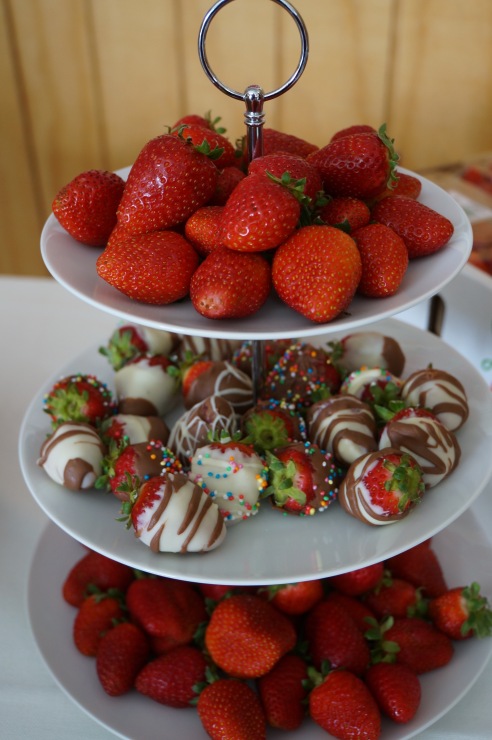 Day’s end brings us to a little villa in the bush, one of five at 31 The Rocks, where we’re greeted by a mob of kangaroos bouncing across the road before we can reach the front door.

Wildlife encounters are frequent in the Granite Belt.

At reception, I’m taken by the screensaver on Debbie and Scott Bradburn’s computer, showing a snowy scene straight off a European postcard. They laugh at my widened eyes and explain that the photo was taken the day they signed the contract to buy the property in 2015 – but they’ve never seen it looking like that!

There’s a reason that Stanthorpe now calls itself the ‘coolest’ town in Queensland – because it literally is. And when snow is predicted in Stanthorpe, the crowds (and the media) turn out in force.

Meanwhile, another reminder of the drought is front-and-centre in the bathroom of our villa, where a small egg-timer attached to the shower wall helps us keep track of our four-minute shower (it’s longer than it sounds).

A reminder to keep our showers short.

I’m up early in the morning, to hike to the top of the rocky escarpment behind the villas for a view over the surrounding countryside, now popping with green after the welcome rain. I look in vain for koalas (they do live here, says Debbie) but there are plenty of kangaroos, wallabies, kookaburras, rainbow lorikeets, parrots and other bright birds. It’s a gorgeous spot.

Kookaburra sits in the old gum tree…as the song goes.

But it’s not long before the rain is teeming down again, and we scupper plans to visit nearby Girraween National Park, known for its huge granite rock formations. Instead, we stumble on Heavenly Chocolate and indulge in some hot chocolate (mine, a rich Zabaglione flavour) and rocky road to take home.

Over the weekend, we drop in to cellar doors at Ridgemill Estate, Robert Channon Wines and St Jude’s, just three of about 35 wineries in the region, and to the Granite Belt Brewery. All have been affected by the long drought, but are up-beat about the future now the rain has come.

Among the vines at Ridgemill Estate.

“Three weeks ago, it didn’t look like this,” said Robert Davidson, St Jude’s owner and chef, waving his arm at the greening fields outside. “It has been an absolute nightmare. Until the rain three weeks ago, people here couldn’t raise their heads. But the rain has given some real hope – and now we can start planning for 2021.

“Let’s hope the rain continues because we can’t live without water. You have to have water to exist.”

“In March 2019, the council planned to pull the pin on us because of the water usage for the brewery. But we need the tourists, so they changed their minds. But we have to watch everything we do very closely now.”

We finished off the weekend catching up with local friends over lunch at Jamworks Gourmet Foods & Larder, which has a range of more than 100 jams, relishes, sauces and chutneys made from local produce, and a café serving pizza, wraps, scones and cream, and other tasty fare.

There’s so much to see and do here, from quirky little shops to rich pickings in the fields, that it’s easy to identify a future plan to come back. Girraween National Park takes its name from the Aboriginal word for “place of flowers” and Spring (September/October) is the best time to see the wildflowers blooming.

Head to Girraween National Park in Spring for wildflowers.

Mayor Tracy Dobie says the message she wants to get out to visitors is that the region is still as beautiful as ever.

“There may be an empty dam out there, but we are resilient people and the land is resilient,” she said.

Before we leave, we wander the main street of Stanthorpe, a tidy attractive town with some lovely heritage buildings. A steady drizzle is falling still;  shoppers have their heads up, smiling, and a small girl skips through the puddles grinning up at her father.

A Glass Half Full and her partner visited Stanthorpe and surrounds as guests of Granite Belt Wine Country.