The sunsets around these parts have been spectacular lately.  That old saying “Red sky at night, shepherd’s delight…” springs to mind, but there’s not much delight for those who understand what’s helping to create those blood-red evening skies.

Bushfires have been raging around Australia in recent weeks, not least in my adopted home state of Queensland, where fires have swept through swathes of bushland, taking homes,  businesses and wildlife with them. Thankfully there have been no human fatalities, but the losses have been devastating nonetheless.

Science explains that when the sun is low on the horizon, and the air is full of dust, smoke and other particles, they scatter the light spectrum creating the vivid reds, oranges and yellows that we love in a sunset. And as anyone who knows me knows…I do love a good sunset.

But that magnificent beauty has been tarnished these past few weeks by the knowledge that it stems from heartbreak and devastation for so many.  Fires, some of them deliberately lit, have raged through New South Wales and south-east Queensland as the bushfire “season” came early this year. In the first two weeks of September, the Queensland Fire and Emergency Service reported more than 1200 bushfires across the state. Some are still burning, and there’s no rain in sight.

One of the great losses has been that of the heritage-listed Binna Burra Lodge on the edge of Lamington National Park in the Gold Coast hinterland, which had welcomed guests from all over the world for more than 80 years. Fanned by strong winds, fire razed the wooden lodge on September 8, and caused extensive damage to the new Sky Lodge apartments which stood a little apart from the main building and nearby wooden cabins.

It was two years, almost to the day, since I had last visited this beautiful spot. Founded by conservationists Arthur Groom and Romeo Lahey in 1933, the lodge had panoramic views of the surrounding rainforest in an area that is part of the World Heritage-listed Central Eastern Rainforest Reserves of Australia.

Before the fire: the entrance to Binna Burra Lodge.

Like many others around Australia, I was deeply saddened by the news of Binna Burra’s loss. This remarkable place has, over the years, captured the hearts of thousands who have visited and stayed here. The Binna Burra website and Facebook pages have been filled with memories of hikes, family holidays, marriage proposals and weddings, and a place where loved ones’ ashes were taken to scatter. It’s the kind of place that people visit as children, and then bring their own children and grandchildren back to.

But Queenslanders are resilient people. Binna Burra Lodge chairman Steve Noakes is leading the charge to rebuild, vowing that the lodge will rise from the ashes as soon as possible. Within days of the fire, the Queensland Government had pledged financial help, and a GoFundMe page had been set up to raise money for those tasks that insurance and government funding would not cover.

“As of today we start looking to the future,” Mr Noakes declared at a press conference.”From disaster comes opportunity.”

As Binna Burra moves forward, the planned rebuild will take into account the world’s changing climate, he said.

From the ashes of the lodge, a few things have survived.  The bell which once hung above the dining room and was rung every day since 1934 to signal meal times, was found intact and has become a symbol of hope.

And in the aftermath of the fires, when my partner Glen posted on Facebook a sunset photo of the Coomera Lookout at Binna Burra, taken on our visit there, Steve Noakes messaged to say the lookout had – in the random way that natural disasters have – been spared the fire. “You’ll be able to take that photo again,” he said. It’s this spot, where Glen also captured a quiet moment I was having in the late afternoon. 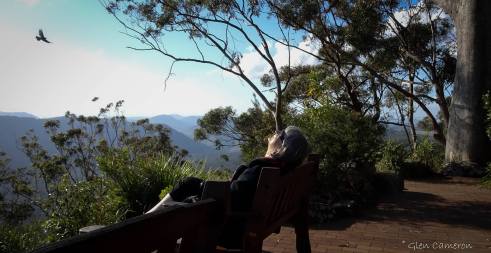 The good news is that Binna Burra’s board has announced that the adjacent camping ground and cafe, both spared, would re-open in time for Christmas holiday bookings and it is hoped that the Sky Lodges will also be repaired in time for summer guests.

Fires, cyclones, floods, drought. The vast state of Queensland, which covers 1.7 million square kilometres and has nearly 7000km of tropical coastline, cops the fury of nature all too frequently. Heartbreak never seems far away, and tears flow. But it’s almost second nature for Queenslanders to pick themselves up, survey the damage and set about putting things right again. And so it is with Binna Burra Lodge.

Along with so many other people, I’m already looking forward to going back to this special place and seeing the “new” Binna Burra. 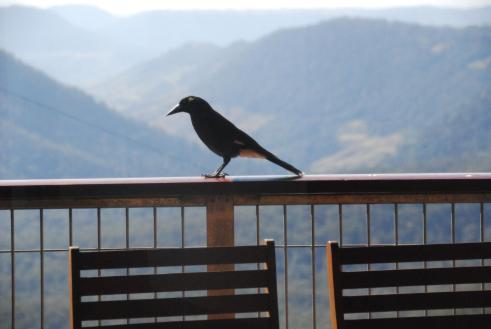 A Glass Half Full visited Binna Burra Lodge in September 2017 as a guest of the lodge.

8 Responses to “From the ashes, resilience and rebuilding at Binna Burra”