Even on the longest stretch of driving along the Outback Way, there was plenty to see: space junk, geocaches, outback cattle stations and giant termite mounds.

On our third day on Australia’s Longest Short Cut, we left Boulia at around 7am to head west, with the early morning cool giving us our first kangaroo sightings of the trip. Before long, we were on unsealed roads as we faced a 600km haul – around nine hours with stops – to our evening at Gemtree, before tackling the final couple of hours to Alice Springs.

For the first few hours, we were on the Donohue Highway, until we hit the border of Queensland and the Northern Territory, where we stopped for the obligatory photos. 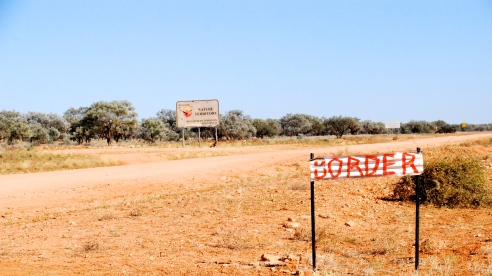 From the border, it’s the Plenty Highway, a 498km mostly unsealed road which offers some challenging driving.  Parts are corrugated,  other sections are sandy, gravelly or limestone, mostly two-lane. But none of it’s impossible or impassable, thankfully!

You know you’re in the Northern Territory when you start to see those massive termite mounds. For scale, we parked the 4WD next to it! 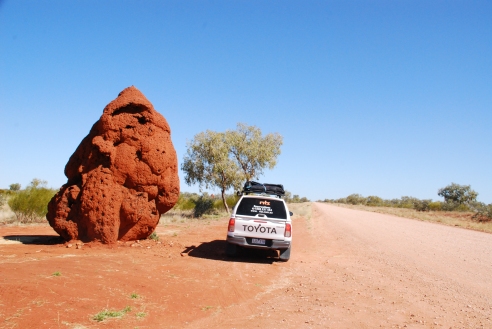 Our first refuelling stop was at Tobermorey cattle station, about 250km from Boulia, then it was straight on for another 215km to Jervois Station. 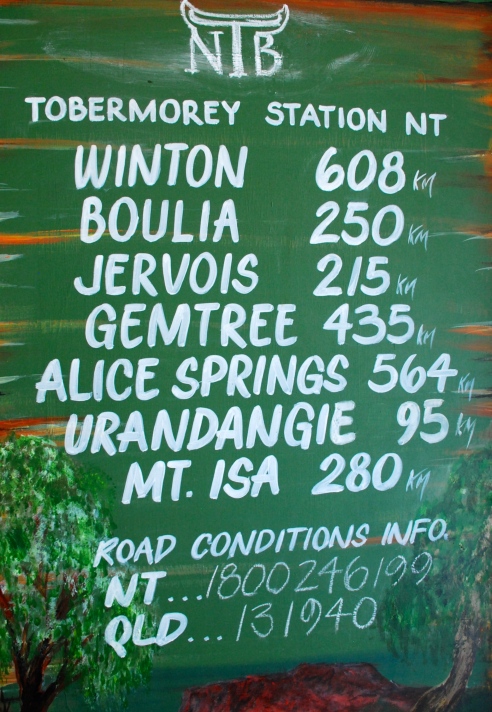 A large painted tyre at the turn-off to Jervois warrants a look, especially if you’re into geocaching, that peculiar “treasure hunt” that’s apparently one of the most popular and fastest growing outdoor games in the world. For the uninitiated, geocaching involves using your GPS to find ‘hidden treasure’ using latitude / longitude coordinates. The ‘treasure’ is usually a small token of little value – key rings, novelty toys or small mementos – usually concealed in a lunchbox, tin, or something similar, called a “cache”. Travellers take one of these little trinkets and replace it with one of their own, recording the transaction in a logbook inside the cache.  There are 34 caches on the Outback Way, located at sites of natural, cultural, historic or scientific interest around 70 to 80km apart. 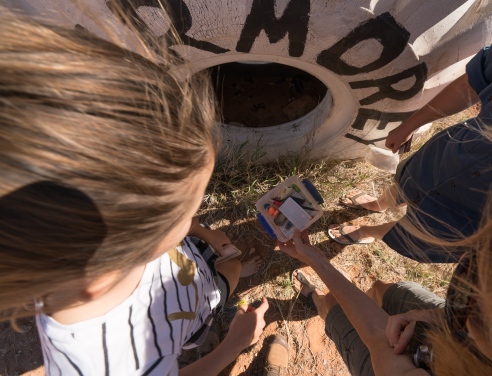 We were also intrigued by the space junk around Jervois Station’s camping area. These are relics of the Woomera Rocket Range. In the 1960s, Australia was part of a major international satellite testing program, launching rockets from Woomera in South Australia. The crashing rockets were likely to come down anywhere, and there are also shelters built in outback areas to protect residents when the falling rockets were likely to land nearby.  One of the 19 shelters can be seen at Jervois, and is now heritage-listed. 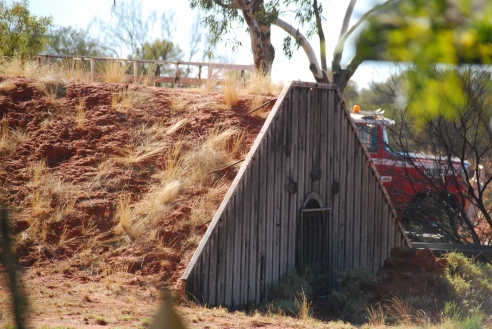 Back in the vehicles, we headed into a different landscape, driving parallel with the magnificent Harts Range, about 42km west of Jervois Station. The distinctive Black Hills and savannah grasslands provided a stark contrast to what we’d seen earlier in the day,  and we spotted the outline of the hills that is locally known as the Sleeping Woman. 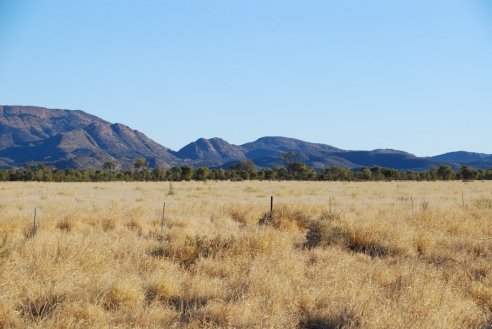 Our early evening stop was at Gemtree, where we’d been told to expect “dinner and a show”. Unsure of exactly what that meant, I was pleasantly surprised. After a look through Gemtree station’s “gem room” and gallery – you can fossick for garnets and zircons in this area – we were ushered to an outdoor dining area by the ebullient Kate McMaster who is a fourth-generation member of this Plenty Highway family.  The “show” combines an interesting tour of the camp kitchen, meeting Kate’s family and the staff, and a short home-movie style documentary that tells the story of her family’s connection with this country. 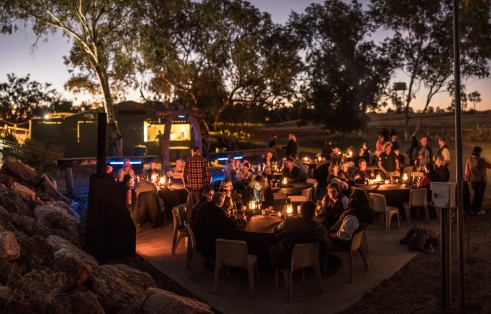 Although Gemtree has cabins, on-site vans and caravan park accommodation, we pushed on to Alice Springs for the night, heading off into the darkness after dinner. It’s another 140km, but thankfully this section of the Plenty Highway is a smoother ride, sealed all the way to Alice!

A Glass Half Full travelled courtesy of The Outback Way Development Board.