One of my strongest childhood memories is of getting lost. I was four years old and it was ANZAC Day, the day on which Australians and New Zealanders turn out to honour those service men and women who lost their lives in wars.

The landing of Allied troops at Gallipoli on April 25 is commemorated every year in both countries as ANZAC Day (for Australia and New Zealand Army Corps), as well as with ceremonies around the world in countries where our troops served. It was first marked unofficially in 1916, before becoming a national public holiday in both countries in the 1920s, with dawn services and public marches now intended as remembrance for all fallen and serving troops from all wars.

Growing up in New Zealand, with a World War II veteran father, it was an annual rite that was never missed. Dad marched with the survivors from his battalion and others from wars before and since “his” war. We gathered at the local war memorial, on a triangle of land in the heart of our town. It was a family ritual, watching the laying of wreaths and hearing the mournful solo bugle play the Last Post.

Nearly every New Zealand and Australian town has a war memorial, usually in the main street. They are part of the fabric of our lives.

On this particular ANZAC Day, when the crowd dispersed the children had permission to run ahead to where our car was parked. I ran with my sisters and cousins, but my little legs had trouble keeping up with the older ones and they disappeared in the crowd. I turned into the wrong side street…and was lost. I don’t know exactly how long I wandered around alone, looking for my family, but it was at least long enough for my parents to become distraught and the police to be called. A couple of hours, perhaps.

Eventually, I found myself in an alleyway beside a railway cutting. Now, I know that for an adult that place is only about two minutes walk from the Cenotaph where we had gathered for the ANZAC Day service. Two elderly women – taking a shortcut through the cutting – came along and found me. I knew my name, and – unsurprisingly in a small town – one of them knew my grandmother. They walked me to her house, about 1.5km away. From there, my parents were phoned and soon arrived to claim me. Relief and tears all round.

So the war memorial on the triangle of land – where we continued to go every ANZAC Day for the first 20 years of my life – holds strong memories for me. So when I heard that the memorial that had stood there since February 1923 had been shifted to a new location, I was horrified. How dare anyone tamper with my memories?

Change is something we often resist, especially when it is linked to long traditions. and I’ve heard that I was not the only one who felt this way about the local council’s decision. The truth was, the location was difficult and crowds each year were growing.

So a couple of years ago, the granite Cenotaph was moved to an inner-city park and a new war memorial created around it. And when I visited it last week, I realised that it was a good move. Last year, an estimated 7500 people took part in Whangarei’s ANZAC Day service, among them hundreds of children, many wearing their old family members’ medals and insignia in tribute. And the new setting is lovely. 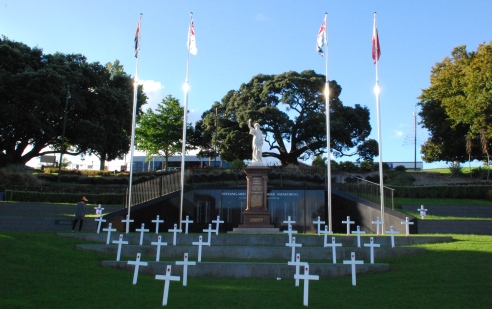 A black marble wall stands behind the old Cenotaph, which was created to remember those from the local district who gave their lives in World War I and has been restored, the 130 names on it newly gilded with gold leaf. The wall carries the 470 names of those who died in the South African War, World War II, and wars in which New Zealanders served in Korea, Vietnam, and the Middle East. Each year, the parkland in front of it is set up with a formation of white crosses representing those people’s sacrifice. It is called the Field of Remembrance.

The Cenotaph’s new inscription reads: “Let silent contemplation be your offering”. This place of peace and beauty makes it easy to offer that. Nearby a small waterfall adds to the atmosphere.

But I still had a question. Who is the beautiful figure in white marble who stands atop the Cenotaph, one hand stretched upward, the other holding a simple wreath of leaves. It seems she is the symbolic figure of Victory, and this is one of only 13 war memorials (of the 900 in New Zealand) to carry a female figure.

And so I rejoiced in this beautiful new setting and let go of my desire to cling to the past. This year, my visit was not timed so I could attend the ANZAC Day service there today…but one year soon, I’ll be there to honour the men and women from my home town – my father and uncles among them – who served their country when it called them.

15 Responses to “Victory in remembering”