When Maria von Trapp led her Captain and seven children across the mountains – or, more accurately, her nine children out the garden gate to the train station that lay behind their Austrian villa – to escape the Nazis in 1938, she could never have imagined that their story would be remembered more than 75 years later.

And when Julie Andrews twirled across an alpine meadow singing her heart out in 1964, she also probably had little idea of the global impact the musical she was starring in – inspired by the von Trapp family’s story – would have.

The hills of Austria, Australia, and – let’s face it, almost the whole world – have been alive with The Sound of Music ever since. More than one billion people have watched the movie, and as the Rodgers & Hammerstein classic marked the end of a year of 50th anniversary celebrations, fans from all over the world descended on Salzburg late last year.

I was among them, clutching an invitation to a gala evening featuring members of the movie cast and of the “real” von Trapp family. And facing a significant dilemma. Forget about solving a problem like Maria. The dress code was formal. What should I wear?

As the big night loomed, there were hopeful rumours and whispers that perhaps, just perhaps, Julie Andrews would make a surprise appearance. Maybe…just maybe…

Salzburg was more than ready for its final extravaganza of celebrations. The picturesque Austrian city and the surrounding SalzburgerLand have been trading on their starring roles in The Sound of Music ever since it first screened on March 2, 1965. Today, a large chunk of the city’s income is derived from tourism, with more than 300,000 people each year nominating The Sound of Music as their motivation for visiting. And they are never disappointed; there are Sound of Music tours, puppet shows (remember ‘The Lonely Goatherd’?), hotels with theme rooms, a stage production of the musical, and a dinner show. The Sound of Music comes second only to Mozart in the Salzburg music stakes.

As I checked in to the elegant Hotel Sacher, Julie Andrews smiled down from a wall in the lobby (she stayed here too, while filming). It was just the first of many surreal moments the next few days would bring.

First, the official press conference, held in the ornate library at Schloss Leopoldskron. The palace was one of two locations used for the filming and we were treated not only to presence of the captain’s 10th and youngest child Johannes – a sprightly 76 – but also of four of the “movie children”, actors Nicholas Hammond (Friedrich), Duane Chase (Kurt), Debbie Turner (Marta) and Heather Menzie Urich (Louisa). The Mayor of Salzburg and the Governor of SalzburgerLand were both also here, smiling broadly. 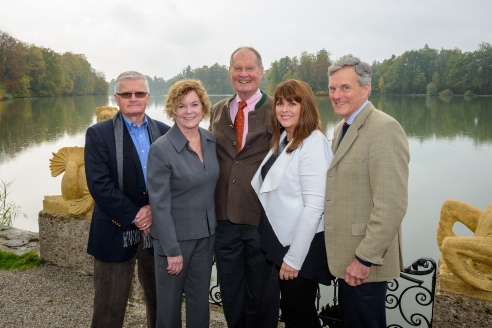 Pink lemonade was served on the terrace (scene of the meeting between the children and their father’s fiancee, the fictional Baroness von Schrader, who was really Princess Yvonne of Austria) but rain drove us inside. The hardy among the throng huddled under umbrellas to snatch photos of “the children” beside the lake. Hammond had already told us his favourite time during filming was the spontaneity of the falling-out-of-the-row-boat-dressed-in-curtains scene.

Weather like this, we’re told, also plagued the production. Shooting time blew out from weeks to months, despite the fact that all the interiors were shot on a Hollywood sound stage.

But The Sound of Music, it turns out, is definitely a case of not letting the facts get in the way of a good story. Everywhere, morsels of the tale – like so many crumbs of Sacher Torte – are dropped, often separating the fact from fiction.

Most revealing was the Original Sound of Music Tour. We were on the bus ready to go when suddenly another von Trapp – granddaughter Elisabeth – jumped aboard, brandishing a guitar, and sent us off with a rousing chorus of “Edelweiss”. And no, it’s not an old Austrian folk song; another illusion shattered. 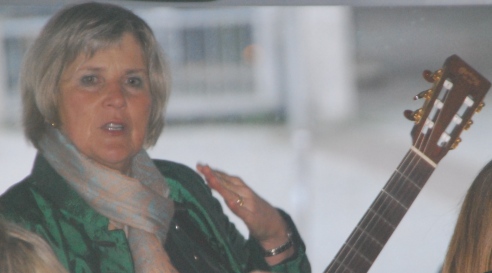 Rolling through Salzburg, we passed the Nonnberg Abbey where Maria was a postulant, wandered in the Mirabell Palace gardens where Maria taught the children “Do-Re-Mi” and visited the rebuilt gazebo – scene of a couple of romantic encounters in the film – in the gardens of Hellbrunn Palace. Out of the city, we drove through the Lake District, past the Villa Trapp and the more ornate palaces used in its stead in the movie. Oh, and there’s the avenue of trees in which the children cavorted wearing their “playsuits” made from Maria’s curtains (a bit of creative licence there, apparently!).

In the village of Mondsee, we walked up the aisle of the gothic cathedral, channelling Julie/Maria in her wedding gown. “I don’t remember it being so pink in the movie,” I mused aloud, gazing around the ornate vaulted interior. Ah, no, says the tour guide, a major restoration was completed in 2009 and the basilica was repainted in its original salmon pink colour. In the cathedral gift shop, I snapped up a copy of Maria’s 1949 autobiography “The Story of the Trapp Family Singers” (they dropped the “von” for a while after emigrating to America).

Another day we were introduced to a new experience that now awaits Sound of Music pilgrims. In Werfen, about 40km south of Salzburg, the new 1.5km Sound of Music Hiking Trail follows some of the movie locations.

Thankfully, we’re not required to lace up our hiking boots, although it’s exactly what we needed after lunch at Werfen’s Michelen-starred Restaurant Obauer, washed down with “Von Trapp Wine” by Weingut Höpler, Breitenbrunn, the exclusive purveyor to the Trapp Family Lodge, in Vermont, where the family has lived since the 1950s.

Instead we took taxis up to one of the lookout points above the village. And there…another weird and somewhat surreal moment…is a young blonde woman having a picnic with seven children, all wearing Austrian costume. A coincidence? Or a publicity stunt? When they break into song, there’s no doubt. In the background is the meadow where Julie Andrews twirled, with Hohenwerfen Castle in the background. And it’s hilarious to see grown men in overcoats having a twirl too, for their friends’ cameras, as Sound of Music fever tightens its grip.

The Sound of Music hiking trail

As the gala night loomed, those children in the meadow gave me an idea: the brocade curtains in my hotel room are safe, but I’m going to don a dirndl for the occasion.

It’s not the first time I’ve shimmied into the Austrian national dress (in the mountain village of Hallstatt a couple of years ago I spent an hour or two sightseeing in a hired dirndl), and so I found myself at Kostumverleih, a Salzburg costume company where formal attire – and in Austria that means lederhosen and dirndls – hangs in racks alongside bridal wear and fancy dress.

A fraulein called Johanna presented me with several choices. First, the white ruffled blouse, then a smart black tunic dress, and I settled on a dark red satin apron over it. Johanna explained the significance of where to tie the bow of the apron on my dirndl. It’s the Austrian equivalent of a flower behind my ear: left means available, right means married, at the back would mean widowed, and in the centre front…she frowns…”undecided”. Getting it right is important. I won’t be the only woman donning a dirndl for this special night at the Kulisse Salzburg Festival Halls. But I might be the most self-conscious!

On the big night we took our seats in the Felsenreitschule, the theatre in which the movie scene of the family singing in the Salzburg Festival was filmed. 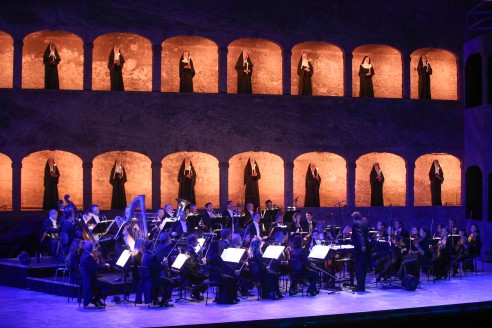 On stage, the star of the stage musical in Salzburg, Uwe Kröger, who plays Captain von Trapp linked the songs – accompanied by the Mozarteum Orchestra Salzburg – with the special guests. Georg Steinitz, former assistant to director Robert Wise and the SOM kids, share memories of filming; Johannes Trapp introduced members of his family, including two little grand-daughters in dirndls; there’s a contemporary take on You Are Sixteen, with Leisel firmly in charge. And a sombre moment when Salzburg mayor Dr Heinz Schaden, who has been welcoming around 6000 Syrian refugees arriving by train in his city each day, reminds us that their plight is similar to that of the von Trapp family when they fled Europe (even the official gala program spells it out: “Welcome Refugees”).

And Julie Andrews? Anticipation builds…and no-one seems in the slightest bit disappointed when instead of the doyen herself, a curtain is thrown back to reveal that she has been immortalised in wax, destined to forever twirl at Madam Tussauds in Vienna. 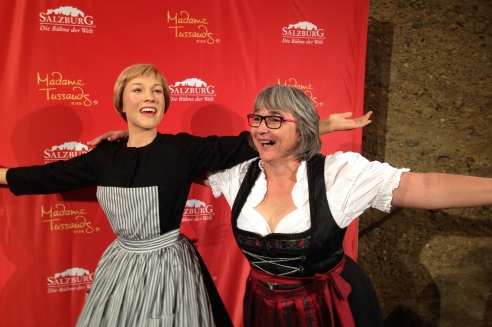 I couldn’t resist a twirl with Julie/Maria!

The London Palladium stage production of The Sound of Music is playing at Brisbane’s Lyric Theatre until May 1, 2016. The Australian production stars Amy Lehpamer as Maria Rainer and Cameron Daddo as Captain Georg von Trapp, alongside Marina Prior as Baroness Schraeder, Jacqueline Dark as Mother Abbess, and Lorraine Bayly as Frau Schmidt. After the Brisbane season, the production moves to Melbourne (from May 13) and Adelaide (from August 9).

A Glass Half Full travelled to Salzburg as a guest of the Austrian National Tourism Office.

One Response to “Fifty years of The Sound of Music”