The boab tree has always fascinated me. This strange, bottle-shaped tree has such an unusual form and each one is unique.

Australian boabs are found only in the Kimberley region of north-west Western Australia, although some specimens can be seen in other places where they have been planted.

Traditionally, boabs were used by Australia’s indigenous people for shelter, food and medicine. A couple of extremely large specimens were also used as “prison trees” in the late 1800s and I was lucky enough to see one of those last year on a day tour from Broome with Kimberley Wild Expeditions. 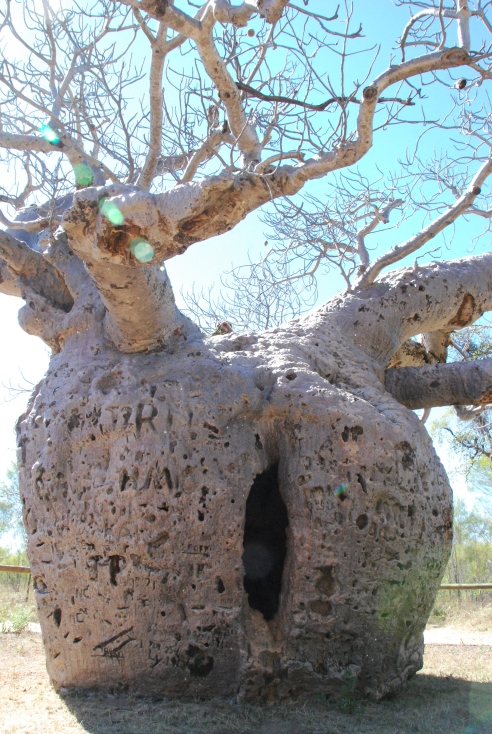 Our tour stopped for a while at the Derby Prison Tree, at a remote spot known as Myalls Bore, about 7km from the town of Derby. The hollow tree – which measures almost 15 metres around its trunk and is believed to be more than 1500 years old – was a resting point for police travelling with Aboriginal prisoners to Derby from places such as Fitzroy Crossing and Christmas Creek, and sometimes further afield.

By 1887, there was a gaol at Derby but the police party often stopped overnight at the giant boab, after walking between 25 and 50km a day, with the prisoners in chains (mostly for crimes such as killing and eating cattle). The hollow tree trunk has a “door” a metre wide and two metres high.

The tree also has traditional cultural significance to Aboriginal people and in 1972 the site was protected under the Aboriginal Heritage Act. A fence was built around it to prevent people compacting the soil around its roots and causing damage to it. In some ways, it was too late; the tree is scarred by carved initials all over it.

Known as Larrkardiy in the local indigenous dialect, boabs are believed by the indigenous people to have special mystical forces – and those who intrude or injure the trees are thought to be exposing themselves to retribution by these magic forces. 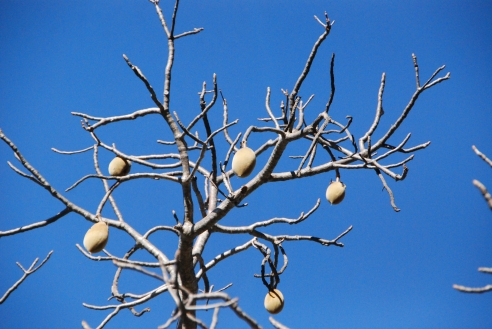 The fruit of the boab is a source of vitamin C. Indigenous people used to eat the gel of the ripening fruit mixed with native bees’ honey.

The Australian boab tree (Adansonia gregorii) is related to the Madagascan and African Adansonia species known as baobabs.

Boabs grow all around the town of Broome, the heart of the Kimberley region. The weekend Broome Courthouse Markets, are held in the shade of many fine boabs in the gardens of the historic Broome Courthouse. 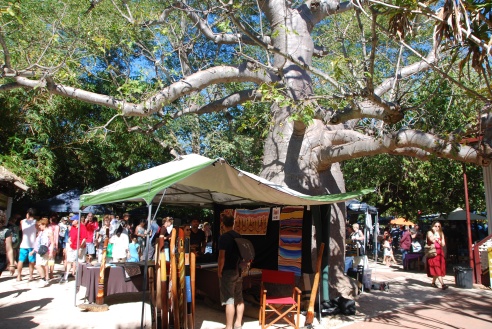 A Glass Half Full travelled as a guest of Australia’s North West and Kimberley Wild Expeditions.

12 Responses to “The Prison Tree”