Boston was one of the places I went on my honeymoon, many moons ago. From London – where we had married – we flew to New York, then took the train to Boston for a few days. My only memories of it really are that it rained torrentially and we moved on quite quickly to our next destination. But I still have some faded snaps taken at the Boston Tea Party Ships Museum.

Boston Marriage, however, is a very different thing! It’s a term I learned this week while attending the Queensland Theatre Company‘s production of Pulitzer Prize winning American writer David Mamet’s play of the same name.

A “Boston marriage” was a term coined to describe a relationship in which two single women live together, in order to have independence, without the need for a husband’s financial support. A same sex “marriage”, but not necessarily a sexual relationship (although in the case of Mamet’s characters, it clearly is).

Although written in 1999, Mamet’s play is set in 1906 and features only three characters (although the presence of others is strongly felt). Two women – Anna and Claire – have been in a “Boston marriage” but things are not going swimmingly. Claire returns after an absence to find Anna has been entertaining a wealthy married man who has bestowed some impressive jewels on her. Claire, in turn, has fallen in love with a younger woman and seeks Anna’s help in her seduction plans. Oh, what a tangled web it becomes!

There is jealousy and anger, tears and tantrums, indignation and sarcasm. The hapless maid, Catherine, bears the brunt of many of the jokes (but just may have had the last laugh). The pace is fast, and the language sometimes convoluted, with a handy glossary in the QTC program a guide to some of the obscure terms used. The language is clever but sometimes the delivery was so fast it lost me (and I fear a number in the audience). The unexpected swearing, delivered with those high society accents, got the biggest laughs.

Like any marriage, that of Anna and Claire is all about compromise. And how they go about that is at the heart of the play.

The QTC cast, headlined by Australian veteran actor Amanda Muggleton (Anna), with Rachel Gordon as Claire and Helen Cassidy as Catherine, do a sterling job, being on stage for the full show.

The set and costumes are wonderful. Anna and Claire’s period dress, by leading Australian stage and costume designer Stephen Curtis, almost made me long for the days of corsets. And as for that stunning necklace…it nearly stole the show. 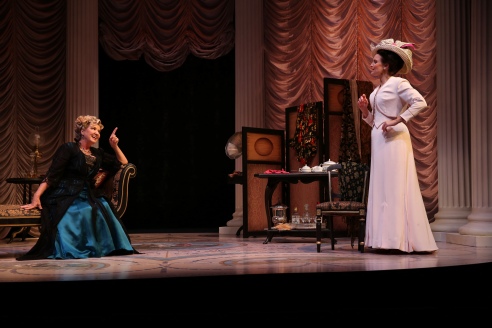 A Glass Half Full was a guest of the Queensland Theatre Company.