Time poor.  It’s a popular phrase these days, and not one I’m keen on, but I think it describes pretty well my silence for a few weeks. I’ve been busy….travelling, meeting publishers’ deadlines, more travelling, entering competitions, sorting out images, more travelling. Is there such a thing as too much travelling? Some might say not, but sometimes I prefer to space my travels out a bit, giving me more writing time and more time to just…breathe.

In recent weeks I’ve had trips to Queensland’s Sunshine Coast hinterland, New Zealand and Fiji and I’ve written a backlog of stories for magazines and newspapers, an app and done various other things. Next year, I hope to balance the travelling and writing time a bit better and be able to blog more frequently.  I’ve certainly got lots of material to share with you from all the galivanting I’ve done this year.

Two weekends ago, I had the official launch of my book, A Glass Half Full and other travel stories at my local bookshop. It was a lot of fun, with about 30 people – friends and strangers – turning up to hear me do a Q&A hosted by my friend and former editor Julie McGlone. The local paper had done a short piece on my book, so we had a good turnout to official kick it off. And I sold a few books too!

I was also recently a nomination in a blogging competition run by the Australian private health fund Bupa, which focussed on blogs with a positive health message for readers.  I didn’t make the finalists, but you can check them out at the Bupa Health Influencer Blog Awards, and (if you live in Australia) vote for the People’s Choice Award. Votes close this Friday (November 7) and just by voting you are automatically entered in to a competition to win an iPad mini!  After entering, I was sent this fun little thing made up of parts of the questionnaire that I had to fill out for them.

A new experience for me a couple of weeks ago was attending my first “instameet”.  I wasn’t even on Instagram when I got invited to join a record attempt by Tourism and Events Queensland, the tourism body for Queensland. The aim was to get more than 1000 Instagrammers to gather at 89 locations across Queensland to create the world’s largest and most far-ranging Instagram Instameet. The locations ranged from Surfers Paradise Beach on the Gold Coast to underwater at Green Island on the Great Barrier Reef, and gave Instagrammers the chance to take photos of koalas and other Australian animals, skydive, head to the outback and much more. Close to home, I headed for the Queensland Art Gallery and Gallery of Modern Art (QAGOMA).  Some groups were hosted by a top instagrammer from Australia, the UK, US, Germany and France. And over the course of the day, around 6000 photos were uploaded to Tourism and Events Queensland’s @queensland Instagram account, which has more than 80,000 followers.

So I joined up, and learned a lot. You can find me now on Instagram @lee_mylne.

Yesterday, I got home from a quick trip to Fiji, where I attended the Australian Society of Travel Writers annual convention and awards night. About 100 travel writers, broadcasters and photographers stayed at the Intercontinental Fiji Golf Resort and Spa, with some (but sadly, not me) staying on to explore other parts of this friendly Pacific island nation. It was my third visit to Fiji, and each time I say I’ll stay longer…but the real reason for going there was the conference and as I was the chair of the society’s annual general meeting, I had work to do as well. That was a bit of a shame, because my room at the resort had a massive “Cleopatra” bathtub on the verandah but I didn’t have a chance to use it! On Saturday night we glammed up for the annual ASTW Awards for Excellence and I was thrilled to be a finalist in two categories. A Glass Half Full and other travel stories was a finalist in the Travel Book of the Year, and I was also a contender for Best Use of Digital Media.  I didn’t bring home a trophy, but I did get to bring home this wonderful wooden carved “tom-tom”, which was a gift from the ASTW membership for chairing the AGM. It makes a mighty noise! 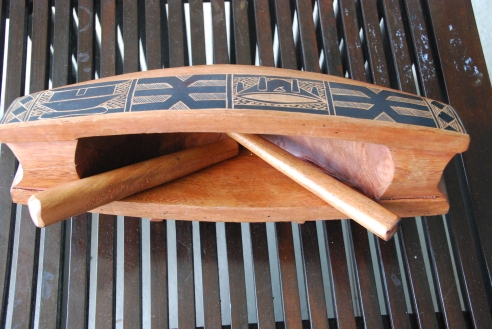 So before I head off again for my last trip of the year next week…there’s a bit of catching up to do. Stories coming up for you will include more from my trip to Europe earlier this year, as well as Western Australia, Outback New South Wales, Queensland’s Sunshine Coast and Cairns region, and New Zealand’s South Island. Promise I won’t leave it so long next time!

14 Responses to “Time to write again”