The outback New South Wales town of Broken Hill is famous for its mining history.  Generations of men have toiled to bring the region’s rich lode of resources – mainly silver – to the surface, and many died in the attempt. Mining’s big business here, and as part of the fabric of Broken Hill life it is also a big tourism drawcard.

When I first visited Broken Hill about five years ago, one of the highlights was the Miners Memorial and the Line of Lode Visitors Centre, which have been Silver City landmarks since 2001. Sadly, when I returned this week, it was to find that both have been closed to the public indefinitely. And all because of red tape. The memorial closed in mid-May and locals say they’re unsure when it will be open again.

Along with the Broken Earth restaurant and a lookout, the memorial makes a dramatic impact, sitting high on the edge of the mullock heap that bisects the city.  Floodlit at night, it was also a wonderful spot for panoramic view of the city. However, the land on which they sit is part of a mining company lease. When the restaurant closed in January, the mining company and cafe operator kept the gates to the popular tourist site open. But then the problem of public liability insurance raised its head; a local told me that a visitor had fallen and broken their arm, an accident that was then classed as a “mining accident” because it happened on within the mining lease area.

According to the Barrier Daily Truth newspaper, the mining company, CBH Resources, was worried about public liability problems and applied to the NSW State Government to relinquish surface rights for the land. When it discovered that the process would take months longer than expected, it decided to close the gates until the issue was resolved.

Crown Lands, which inherited the Line of Lode assets in 2010, has agreed to also take on the land – but it is all taking time to process the official submission and complete the hand-over. And until it is, the site will remained closed to the public.

More than 800 miners have lost their lives since the late 1800s. Their legacy is commemorated on the memorial, which bears the names of many whose families are now unable to visit. This, according to one man I spoke to in Broken Hill, has made many of the locals very unhappy. And as my memory of my last visit was of a place that paid a wonderful tribute to those who have lost their lives in the mining industry, I felt for them. For some there is no other grave, no other memorial, to visit in memory of their loved ones or ancestors. 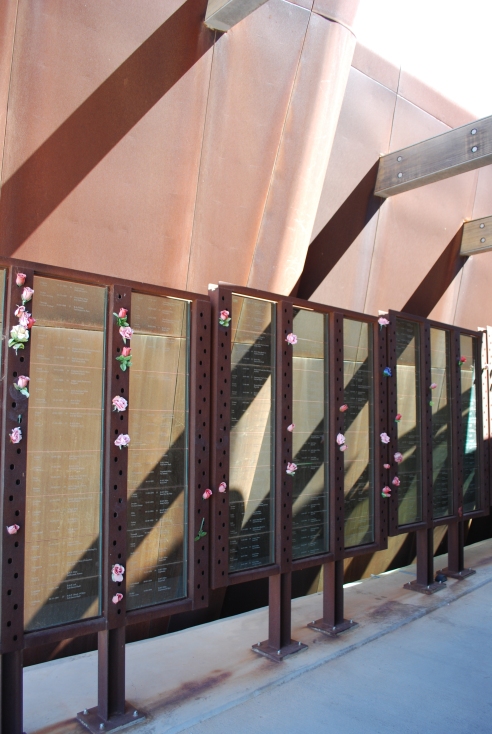 One of the other attractions at the top of the giant mullock heap on which the two buildings sit is a “big red chair”. And it, apparently, is one of the places where visitors sometimes get hurt (the chair was chained off in February, following a risk assessment, according the Barrier Daily Truth). I was one who climbed up to have my photo taken on this chair (without incident). 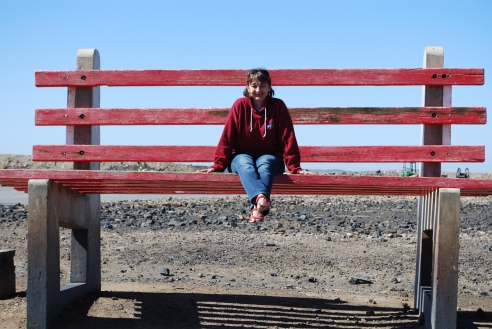 But all is not lost if you are a visitor wanting to see the memorial. One local tour company, Silver City Tours, still includes a visit to the site in its tours but that – for the moment – is the only way to see it. And of course there are plenty of other reasons to come here – including mining museums that will tell you much about the history and legacy of the mining industry in Broken Hill. I’ll have more about this fascinating region in upcoming blog posts. 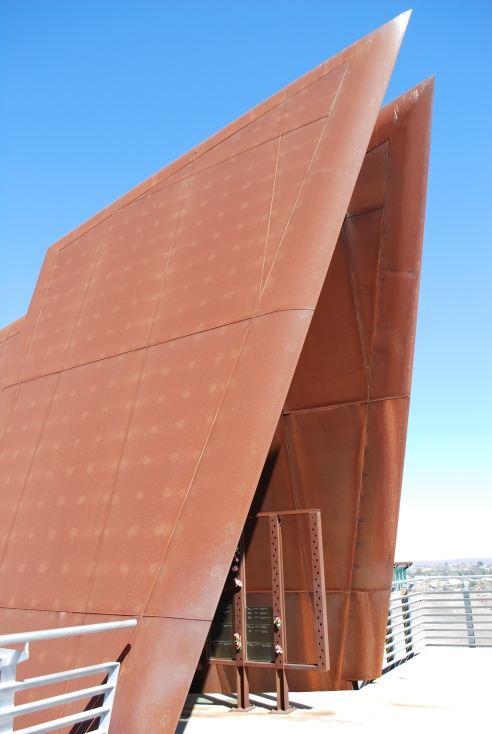 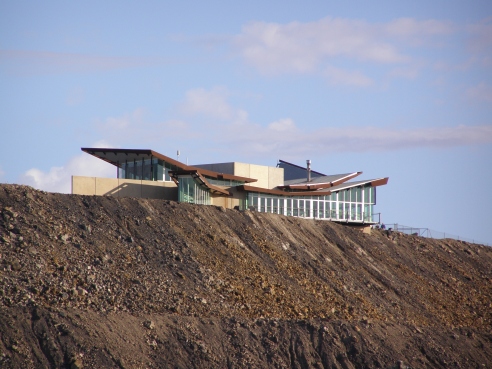 A Glass Half Full visited Broken Hill as a guest of Outback NSW and  New South Wales National Parks.

4 Responses to “Missing out on the Miners Memorial”