Unique and extraordinary. Two words that journalists try to avoid, because so rarely are they used accurately.

But – hot on the heels of the interesting experience of seeing the movie Noah – I find myself in tropical north Queensland, communing with some of Australia’s unique, extraordinary animals. And they really are.  Even Australians – familiar as they are with encounters with them – get excited by this continent’s native creatures, especially when seen in the wild.

Today, I am in Townsville, a northern city known for its mining industry and its proximity to the southern part of the Great Barrier Reef. It’s also a military town, and I had a reminder of that when three fighter jets flew over as I was driving on the highway today.

I was bound for Billabong Sanctuary, a wildlife park just south of the city. My last visit here was about seven years ago, and since then this region of Queensland has been belted hard by a cyclone.  In February 2011, Cyclone Yasi tore through and Billabong Sanctuary was just one of many places left devastated.

It was a cruel blow for owners Bob and Del Fleming, who opened Billabong Sanctuary 30 years ago. Although no animals were killed in the storm, the sanctuary was closed for 10 weeks while order was restored and repairs undertaken. Today, Bob showed me around a sanctuary which is still recovering.

A two-hectare billabong (lagoon) is the heart of the sanctuary and is still as lovely as ever. But it will still be some time before the whole place is restored to its former state.

Nevertheless, this is a great place to visit – and kids love it.  Even better, it is playing an important role in the conservation of many animal species at risk. The park is home to more than 50 species of animals, including successful breeding colonies of koalas, crocodiles, eclectus parrots, squirrel gliders, kangaroos, red-tailed black cockatoos and lizards and snakes.

Native birds flock to the billabong and its island in their thousands, including whistling ducks, magpie geese, Pacific black ducks, ibises, egrets, moorhens, darters, pelicans, spoonbills and sea eagles.  Some of the birds flew off during the cyclone “but they know where they can find food” and had gradually returned, says Bob.

I’ve arrived in the afternoon, in time for the daily birds of prey show, which is soon followed by a snake show featuring some of the world’s most venomous snakes.

Checking out a venomous Coastal Taipan – from a safe distance.

Nearby, a cheeky sulphur-crested cockatoo called Jacko struts his stuff for visitors, and a more discreet red-tailed black cockatoo  called Ash sits on a perch just waiting to have his photo taken.

One of the most endangered species living here is the Cassowary. There are fewer than 1000 cassowaries left in the Australian wild. Yarrabah is about 30 years old now, and is a proven father, but will soon be too old to take an active part in the captive breeding programme. His new mate, Hope, is newly arrived from Perth Zoo and still settling in. These large and unusual birds are often referred to as “dinosaur birds” as they have such an ancient lineage.

As we’re wandering back from a look at the crocodiles, ranger Amy is nursing Tonka the bare-nosed wombat. Tonka loves having his tummy and chin stroked, and is lying flat enjoying every minute of the attention. Tonka was almost a casualty of Cyclone Yasi;  for weeks after the storm – while the park was closed to visitors and the rangers were busy cleaning up – he was moping around and losing weight. The veterinarian could find no physiological cause but finally diagnosed depression. When the park re-opened and the wombat shows re-started, Tonka suddenly perked up and started gaining weight.  The diagnosis was clear: he had missed the daily contact with people. 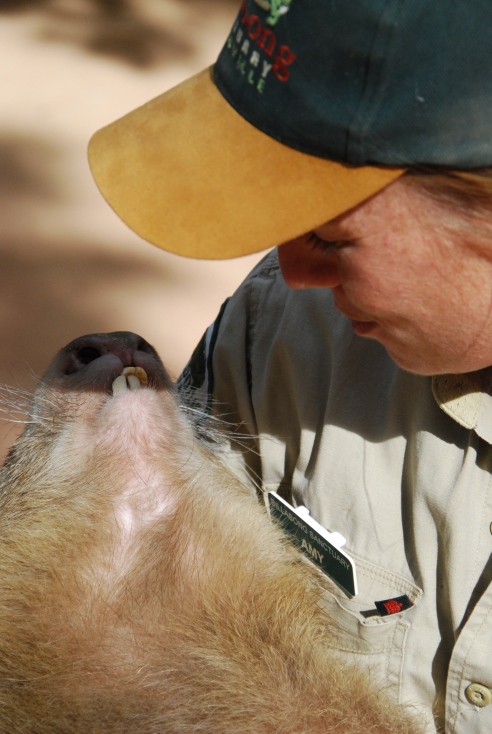 Ranger Amy with Tonka the wombat

And of course there are koalas and kangaroos. Amy brings out Puzzle to meet us. Named for the markings on her soft fur, Puzzle is about one year old, and really looks like a toy koala.  But she’s not so used to human attention and a few minutes of it is enough for her before she’s taken back to her enclosure for some peace.

Cute and furry, koalas are a great attraction

Feeding the kangaroos is popular, and those who call Billabong Sanctuary home are not shy, coming up to nuzzle for treats and wandering freely along the paths.

A kangaroo joey tucks in to its mother’s pouch

Billabong Sanctuary is a great place for children, where they can get up close to native wildlife and learn more about how precious – and yes, unique – they are. 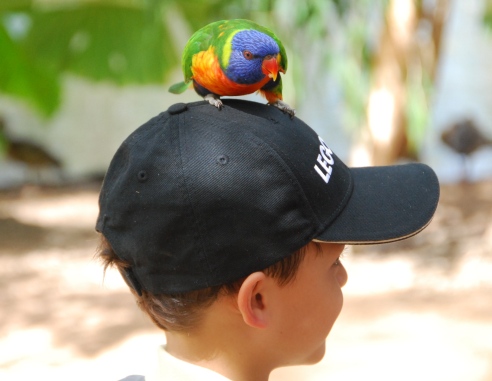 A Glass Half Full travelled to Townsville as a guest of Tourism and Events Queensland.