My new home is near a flight path into Brisbane Airport.  I didn’t know that before I moved in, but it’s not a real problem. I’m not directly under it and the noise doesn’t bother me at all – but it’s close enough that if I’m sitting outside, I notice when the big planes are coming in.  Sitting on my balcony with a friend the other day, I looked up as a jet flew in, narrowed my eyes, and said casually: “Ah…Hawaiian Airlines!”.

Hawaiian Airlines, with its bright colours.

I was quite surprised that I was able so easily to identify the livery on the tail. I’m not one of those people who knows – or cares – what kind of plane I’m travelling on. When it comes to giant commercial aircraft, I’m a dunce. As long it has reliable engines, wings and two pilots, I’m content. I recognise that some planes are more modern than others (on a long haul, an in-seat video player is essential, thank you), and that the Airbus A380 is the top of the range. But other than that, I don’t really care. In my opinion, that’s very much a male kind of obsession.  I’ve heard countless men in boarding queues discussing the configuration of the plane they’re about to fly on, and it really amuses me.

But livery is another matter. I like a plane that looks good. Colour is important. Hawaiian Airlines gets my tick of approval, as did Virgin Australia for its former bright red paint-job (now sadly transitioning to boring white). I even liked the rather old-fashioned way Virgin had figureheads of women painted on them as nose art, complete with a wide-brimmed Aussie hat and flag (now reduced to not much more than a pencil outline).

From time to time, some airlines paint their aircraft for special occasions. I love the Qantas “flying art” planes that are painted in Aboriginal designs, and last year Air New Zealand had one themed to promote the release of the first movie in The Hobbit trilogy (filmed in NZ by Kiwi director Peter Jackson). Qantas plans to unveil another “Dreamtime” themed aircraft next month as part of its “Flying Art” series. It will be the fourth since 1994 when a Boeing 747-400 was painted as Wunala Dreaming, using motifs from Northern and Central Australia.

Wunala, one of the indigenous themed Qantas planes already flying.

But although I might be teeny bit biased I have to say that I was thrilled to read that Air New Zealand plans to gradually repaint all its planes in new black and white livery, doing away with the teal blue colour that has been its signature since  its beginnings as Tasman Empire Airways Limited (TEAL) in 1939. Starting with its domestic fleet, the planes will move to white, with a black tail emblazoned with a white fern, representing the New Zealand symbol, the Silver Fern, and retaining the traditional koru (fern frond) symbol which Air New Zealand has used since 1973.

While most of the fleet will sport this white version of the livery the airline will also continue to have a small number of signature aircraft in an all-black version – and I’ve got to say that dramatic look is my favourite. 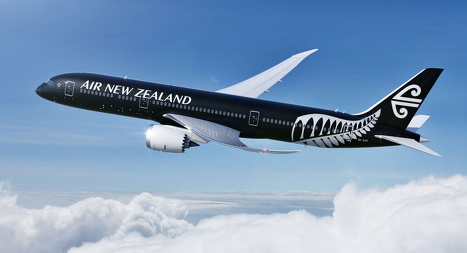 It’s slightly different to the All Blacks-inspired black livery that was introduced  during the rugby World Cup tournament hosted in New Zealand during 2011, but it will do! I’ve  seen lots of people snapping photos of that very distinctive Airbus when I’ve seen it at airports!

Do you have a favourite airline livery? I’d love to know!

This is not a sponsored post. All images supplied.