“Holy Toledo!”  Have you ever wondered how that saying came into being?  I’ve always thought it had something to do with Toledo, Ohio, in the United States (although I’m not sure why) – and there’s one school of thought that does think that. But having just been on a trip to Toledo, Spain, I reckon it’s a truly literal saying. Toledo is definitely a city steeped in religious symbolism. 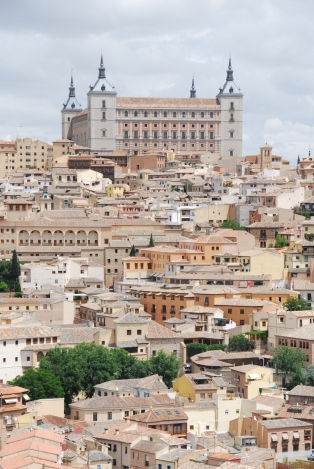 Spain may be constitutionally a secular society, but the reality is that more than 70 per cent of the population is Catholic. But as any tour of Spain will teach you, there’s been a strong Muslim, Jewish and Moorish influence on the country over the course of its diverse history, and many religious buildings have changed hands (or denominations) over the centuries. Toledo is no exception.

The sepia-toned World Heritage-listed town  sits high above the River Tagus, and is dominated by the 16th century Alcazar fortress. Toledo was Spain’s capital until 1561, when Philip II moved it to Madrid.

Toledo is an attractive city, about 45 minutes drive south of Madrid, and well worth a day trip. Be prepared for some serious walking, as that’s the best way to discover the cobblestone alleys and back streets of the Old Town.

After a quick lunch – one of the best tapas meals I had while in Spain – in a little bar just off the main square, we set off to check out some of the city’s historic attractions, including the 13th century Gothic cathedral, and in the Jewish Quarter, Spain’s oldest synagogue, dating back to the 12th century, now owned by the Catholic Church.

A Glass Half Full travelled to Spain as a guest of Globus.