I love newspapers.  Since the first day I stepped into the organised chaos of a newsroom, and the first time I heard the thunder of rolling newspaper presses, I’ve been hooked.  The smell of newsprint and ink is addictive, perhaps.

When I travel, I love to read local papers. Good or bad, they tell you a lot about a place.  Things have changed rapidly in the newspaper world in recent years, and some people wonder if there will be newspapers at all in the future, as many move to online-only production.  The big titles might do that, but I believe there will still be a place for small, independently-owned newspapers delivering the local news to their communities.

I came across a couple of these on my recent wanderings through northern New South Wales: the Don Dorrigo Gazette and Guy Fawkes Advocate in Dorrigo, and the Echo, in Byron Bay.

Reputedly the only newspaper in Australia still hand-set using lead type, the Don Dorrigo Gazette looks like a newspaper from another century.  And in a way it is…it was established 103 years ago and still has the same six-column layout that was common then.  There are no photographs and only a few graphics.

For $1, the 1000-odd residents of Dorrigo and nearby Guy Fawkes can find out what’s happening in their neighbourhood. The retirement of a local dairy farmer was the front-page lead in the week I dropped in to Dorrigo. The story ran two-and-a-half columns, with a spill to page three, including the farmer’s family history, reflections on life on the land since they settled in the Dorrigo area in 1908 and a Q&A with the man himself.

There was also cattle sale news, a state-wide story about new smoke-free zone laws in New South Wales, the squash club and golfing results,  pony club news, reports from the two local schools, and an update about new signage in Dorrigo streets.  Page five carried a murder story – but from the larger regional town of Armidale, about 120km away.  There was a bit more in the eight page paper, including letters to the editor, a prayer/poem (To: God.com) and a joke.

Many of the stories had the feel of being written by members of the clubs, rather than the editor. I saw plenty of similar stories when I was working on a small newspaper at the beginning of my career…and I love them.  There’s nothing so personal in the big papers these days.

A couple of days later, in the coastal resort town of Byron Bay, I reacquainted myself with The Echo.  The rainbow-hued masthead shows that gentrification hasn’t robbed Byron of its hippie roots. On page one, there’s a story about a surfing school and Australia Day (“or Survival Day if you prefer”) events.

The Echo’s full of local politics and a lot of the writing is highly opinionated. It’s also very personal, and while there’s lots of mainstream community news, you’re also likely to clues to the things that Byron’s residents are into, such as essential oils being sourced locally. It’s a free paper, 60 pages with lots of advertising, book reviews, opinion columns and letters. But the community feel prevails and you really feel like you’re finding out what makes the place tick. 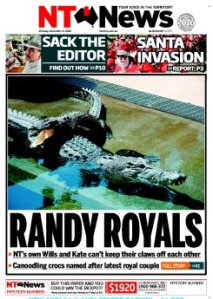 But the paper I love to read the most when I’m travelling in Australia is the tabloid Northern Territory News.  Owned by Rupert Murdoch, there’s just nothing else like it.  It’s bold and brash and often outrageous. Known for its hilarious splash headlines and whacky stories, the NT News is unique (and that’s not a word I use lightly).  If there’s not a story about a crocodile in the first five pages, it’s almost unbelievable. As are many of the stories. And the sub-editors who write the headings are obviously given free rein to be as corny as they like.

But don’t get me wrong. The NT News is a serious newspaper; it’s just got a style all of its own. Read it while you’re in the Territory and you’ll learn a lot about Australia (or parts of it at least).

So next time you stop in a small town, make sure you pick up a copy of the local rag. It will be sure to entertain and enlighten you.

11 Responses to “Keeping the presses rolling”