My waitress has a moustache.  It’s black and pencil-thin, curling up at the ends; the kind of moustache that a vaudevillian villain would twirl while pondering the next evil plot twist.

I’m relieved to see she’s not alone. The upper lips of the other wait staff (of both genders) at the restaurant – Brisbane’s riverside Popolo at South Bank – are all similarly adorned. The women have identical inked-on moustaches and the men are growing their own (with varying degrees of success).

It’s only mid-month, so like thousands of men around the world, they’re finding out – some for the first time ever – how quickly they can develop a luxuriant moustache.

Yes, it’s Movember, the month when for the past decade men give up shaving for a good cause, and their supportive women pencil or stick them on, wear t-shirts or buy other tokens to help raise awareness of prostate cancer and men’s health.

As any of my friends will tell you, I like men with beards.  I like men who shave too – there’s no particular preference really, but unlike some women I don’t abhor the tickle of whiskers.  And it’s nothing to do with my father; one of the strongest memories I have of my Dad is of how smoothly shaved his face was (my mother probably had a say in that, as he’d sported a beard from time to time when he was single).

Known as Mo Bros, the men who shave on November 1 and then shun the razor for the next 29 days become walking advertisements, sponsored by their supporters. They’re by no means alone, with businesses large and small also embracing the cause, including some of the biggest names around. 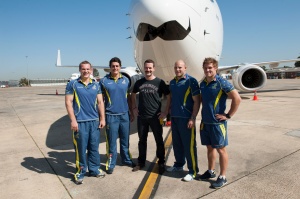 Qantas is a big supporter of Movember.

For example, a Qantas plane – a Boeing 737-800 – is sporting a giant moustache as it flies around Australia this month. It’s the second year that Qantas has supported the Movember Foundation, something that Qantas CEO Alan Joyce – a prostate cancer survivor himself – is proud of. Qantas will be screening in-flight programs about the Prostate Cancer Specialist Nursing Programme this month, and there’s also a giant mo on display inside Melbourne’s domestic airport terminal.

The men of Rajasthan in India are known for their luxuriant moustaches. This gentleman is easily out-done by one of his countrymen, Ram Singh Chauhan of Rajasthan, who has the world’s longest moustache – at 14 feet – and who regularly massages it with mustard and coconut oil to keep it healthy. Not sure he’d be nice to be near!

Movember has come a long way since its humble beginnings in Melbourne 10 years ago. It’s now a global movement inspiring more than 1.9 million people to take an active part during that time. Last year, more than 854,000 Mo Bros and Mo Sistas around the world signed up, raising $124 million.

In Australia, the money raised is directed to programs run by Movember, the Prostate Cancer Foundation of Australia and beyondblue: the national depression initiative.

So if you are a man, or if you are a woman who loves a man – be it your brother, son, partner or friend – remember that it’s never too late to help out with this cause.  The month maybe well underway, but it’s not too late to donate or get involved. And to all those moustache-wearers out there this month – male and female – well done!

8 Responses to “The meaningful month of Mo”